The second project is an easy way to add high-quality image popups that can be zoomed, but when closed you return back to the same panorama with the same view.


Starting with the floor plan project.
This has three nodes, node1 is a flat map image, then the two tour nodes, all be it my test images.
The flat image, node1, is set to type Flat and under the viewing, parameters have FoV set to No Borders. 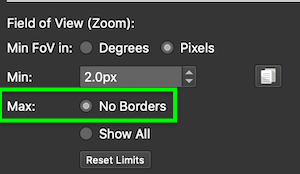 
Node1 has two hotspots going to each node of the tour nodes.
The Hotspots on the map are using the Skin ID "ht_map". 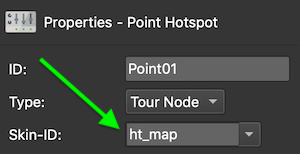 
Node1, map, has a tag: "floorplan".
The tour nodes have hotspots that link to each other and is using the Skin ID, "ht_node".

In the skin, there is a variable called "var_view" which is a text variable.
It also has two Point Hotspot Templates, ht_node and ht_map.

The template ht_map has an open next panorama action and the two map pin images have visible logic blocks that show visited nodes.
The other Point Hotspot is the Point Hotspot Component found in the Components Toolbox.

The container "picture_controls" has an action that sets the Pan, Tilt and FoV to the variable, var_view. 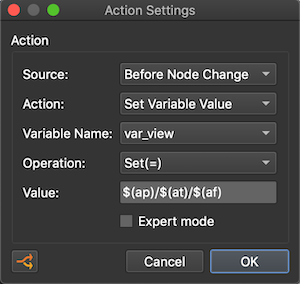 
So it does not record the Pan, Tilt and FoV of the tour nodes it has an Action Filter.


The container "picture_controls" also has a visible logic block that only shows when node1 is visible using the tag "floorpan".


The element "button_open_map" has two actions, the first is the standard mouse click, open next panorama action opening node1, the map.

The second action is a mouse click, open next panorama action that opens node1 but uses the variable for the target view. 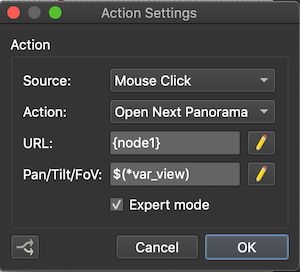 The next project, image popup, is set up in a similar way using tags, but in the skin, there is a container "node_view".
This has three actions to set the nodes and view.
One on Config Loaded, then on Node Changed, with an Action Filter.
Then Before Node Changed, again with an action filter.
The filters are there so the node and view are not recorded for the nodes that do not contain the tag "photo".
To change the background colour, you do this under the HTML5 output, select the Image tab
Change the Background Colour there.