A Multi Tour project is a project that has many self-contained sub tours in one project.

However what if you want to be able to give the viewer the option to turn the project into one big tour with all sub tours linking together but then switch back to individual sub tours, this is what this project will do.

It is based on the Thumbnail Menu with Categories component with modifications.
How it is used is the categories represent the sub tours, when a sub tour is selected you open the first node of the sub tour and only have hotspots between the nodes of that sub tour.

If you then select the category All Locations the hotspots between the sub tours now become visible and turn the project into one large tour.

You select how the project opens by changing the order of the table found under the Skin Configuration button.
Note: in the skin configuration the tags have been given the proper title of each sub tour.
The top category is what the tour will open with. To change the order click on the tab and drag the category to the top, this will then display when the project is created. In the below screenshot you will see All Location is at the top so the project will open showing all nodes of all the sub tours with linking hotspots. 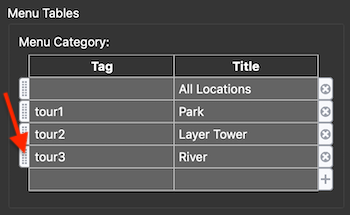 
If you want the project to only have sub tours and not have the option to show all just delete the category in the skin configuration All Locations.
Then the top category, sub tour will display on project open only showing the thumbnails of that sub tour and only having the hotspots linking between the nodes.

The project:
Each node needs to be tagged to identify which sub tour it belongs to.
The easiest way to do this is to put all the nodes of each sub tour in its own folder.
In this example, I am using the folder names tour1, tour2 and tour3.
When the panoramas are added to Pano2VR they are then tagged with the folder name.

The Thumbnail Menu with category was added to a new skin along with the Node Hotspot Silhouette.
A variable was added to the skin: cloner_var which is a text variable.

The hotspot, ht_node was then given the visible logic block:


Moving to the Thumbnail Menu with Categories, expend the menu_background element in the Tree and select the text box category_text. 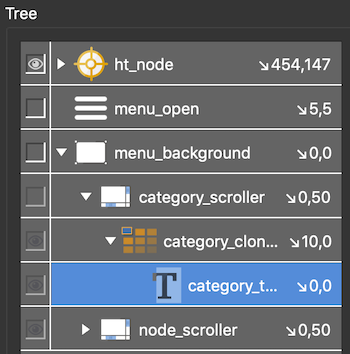 
This has two additional actions, the first sets the cloner tag to variable value on click. 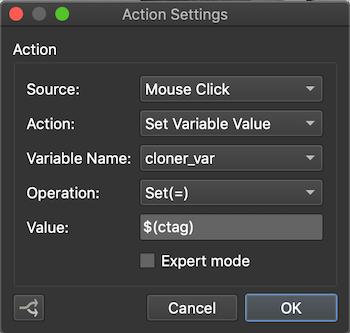 
So in this example, if you select the Park tour then the tag tour1 will be added to the variable value.
The visible logic block in the hotspot means the hotspot will now only show in the tour nodes with the tag tour1.
The other action changes the node so on click opens the first node of each sub tour: 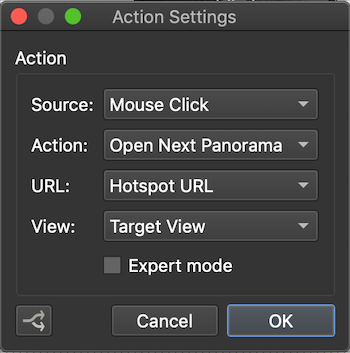 
To make this work properly you also need to remove the action from the category_text element: 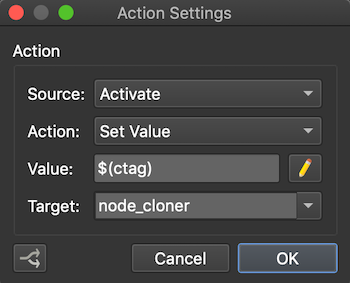 
If this action is not removed what will happen is if you select the category All Locations to show all the thumbnails, when a thumbnail is selected the menu would change to show only the nodes of that sub tour, with this removed it will continue to show all thumbnails until you use the menu to select one of the sub tours.

Adding a Map element:
If you would like to use the Map element with this project then you will need to use the Clone as Marker map element feature.
For this, I used the Map Pin component.
Add the component to the skin editor then deselect visible in the container "map_pin".
Now add the same visible logic block we did for the hotspot template:


What this will do is only show the map pins for the selected sub tour.
When the category All is selected all the Map Pins will now be visible.
Regards,
Hopki

This is great Hopki. May I request that you do a video tutorial for this?
Top

Hi jiminlai,
The post does go into detail, I'm not sure if spending the time to produce a video would be of any benefit.
Regards,
Hopki
Hopki
Garden Gnome Software Support
If you send an e-mail to support please send a link to the forum post for reference.
support@ggnome.com
https://ggnome.com/wiki/documentation/
Top

I am building a multi tour project with individual sub tours, based off this project.

I am running into a little problem, however. When viewing the tour and i start autorotate, it first plays through the selected sub tour panoramas, then plays through the others as well. Is there a way to limit the autorotate to just the panoramas/subtours i want to see?