Just wondering whether Pano2VR writes any meta data to the JPG photos, in particular, the photo GPS data?
If the upload of meta data fails, then the information in the JPG would be the only way Street View can locate the image?
Top

Hi,
Pano2VR does inject metadata into the panoramas but street view reads the metadata sent up after for GPS.
So as an example if you make any changes, depending on what they are you will need to replace the panorama for some but just upload metadata for others.

So you need to delete the pano on street view first if you:

But you do not have to delete the panorama first if you:

Use the Upload Project button to make changes.

But regardless if you do not have to delete a pano, changes happen faster if you delete the tour from street view first, then wait a few hours then upload the project as a complete tour.
But this will remove the view count.
You can select an individual panorama and delete, then use the Upload project button to replace it in street view.
Regards,
Hopki
support@ggnome.com
Top

Hello Martin,
thanks for this detailed explanation.
Sadly this was not very clear for me, the last years...

So NOW I stuck in a tour, because I had "tested" some modifications over the last month...
Therefore ther´s a big mess now...

Some of the many changes and attempts I don't even know in detail anymore.

I also know, that I screwed it up myself, but I still have to get on somehow.

I am completely clueless and would need any help...

So, I try to describe and hope for helpful tips, maybe some other desperate user had a comparable situation...

1. In 2015 I shot a large tour and created 3 levels /floors. This was not uploaded with Pano2VR, but in the Google Desktop Tools.
2. In 2017 the interior views on the ground floor were newly photographed and I downlaoded the tour from G.Maps and tried to replace the panoramas with Pano2VR, but in 2017 no "howto" was really clear...
3. Google had errors and problems, and maybe some errors and problems in p2vr existed, plus my own errors and wrong modes of operation... ... that all resulted in this complete horror szenario.

What do I see NOW:
1. A tour that does not show all of the panoramas, nor all links, nor the "3 levels elevator buttons" in all panoramas:
https://www.google.de/maps/place/Body+U ... 5331?hl=de

2. In Pano2VR it is even worse, because also here, everthing is a big mess:
-- in 2017 I downloaded and saved the p2vr file, to be able to replace some of the panos.
-- I wanted to be "clever" and copied that file and did some modifications and saved this as a seperate file.
-- As it never worked perfectly in G.Maps, I tried several "modifications" over the month...
-- After the last 2 years I lost the overview and now I AM LOST...

---- When I open some of the older p2vr files, some of the "links" to Google are not active and that seem to be logical, because I modified it with some later files...
---- But also with the latest files, I cannot go on, because that type of error appears on some of the panoramas now:

So it seems that I cannot delete the files, not modify, not "overwrite" (replace) - I can do nothing, because I cannot "reach" them.
My thoughts: To delete the complete tour would not be a solution, because when trying to delete one panorama, results in that error message...

---- Furthermore, when I open the streetview browser with one of the older p2vr files, this message is shown - and what the hell does it mean (exactly) - and what do I need to do, to NOT make the chaos deeper...???

--- what happens, what is done (exactly) when I click on "connect to current panorama":
What for is that function, when is it usually used and where is the description and manual for learning this funktion and the other one: " add link to external panorama"?

--- Furthermore I need to ask, WHAT exactly does those possibilities mean and when is a proper case to use it:
// disconnect from streetview ??
// Manually set Photo ID ?? 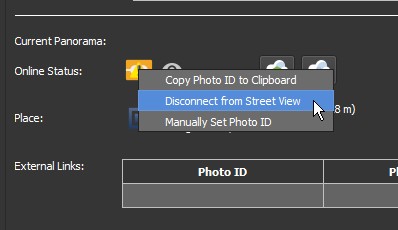 Maybe I can use some of those special options - maybee in an "unusual" sequence- to rescue this tour ???
Soulbrother - one time in front of the camera
Fotokurse, Fotoworkshops und Panoramaschulungen
Neu in München: Der Irisfotograf
Top

Users browsing this forum: No registered users and 9 guests