I am currently having an issue with a skin element:

I have positioned the Gyro icon at the edge of the control bar in the skin editor, however, when I create the output and watch the tour, the skin element (gyro icon) appears in between the icon for next & previous panorama. Refer to the photographs.

I am attaching the skin just in case you need it

Any help would be greatly appreciated 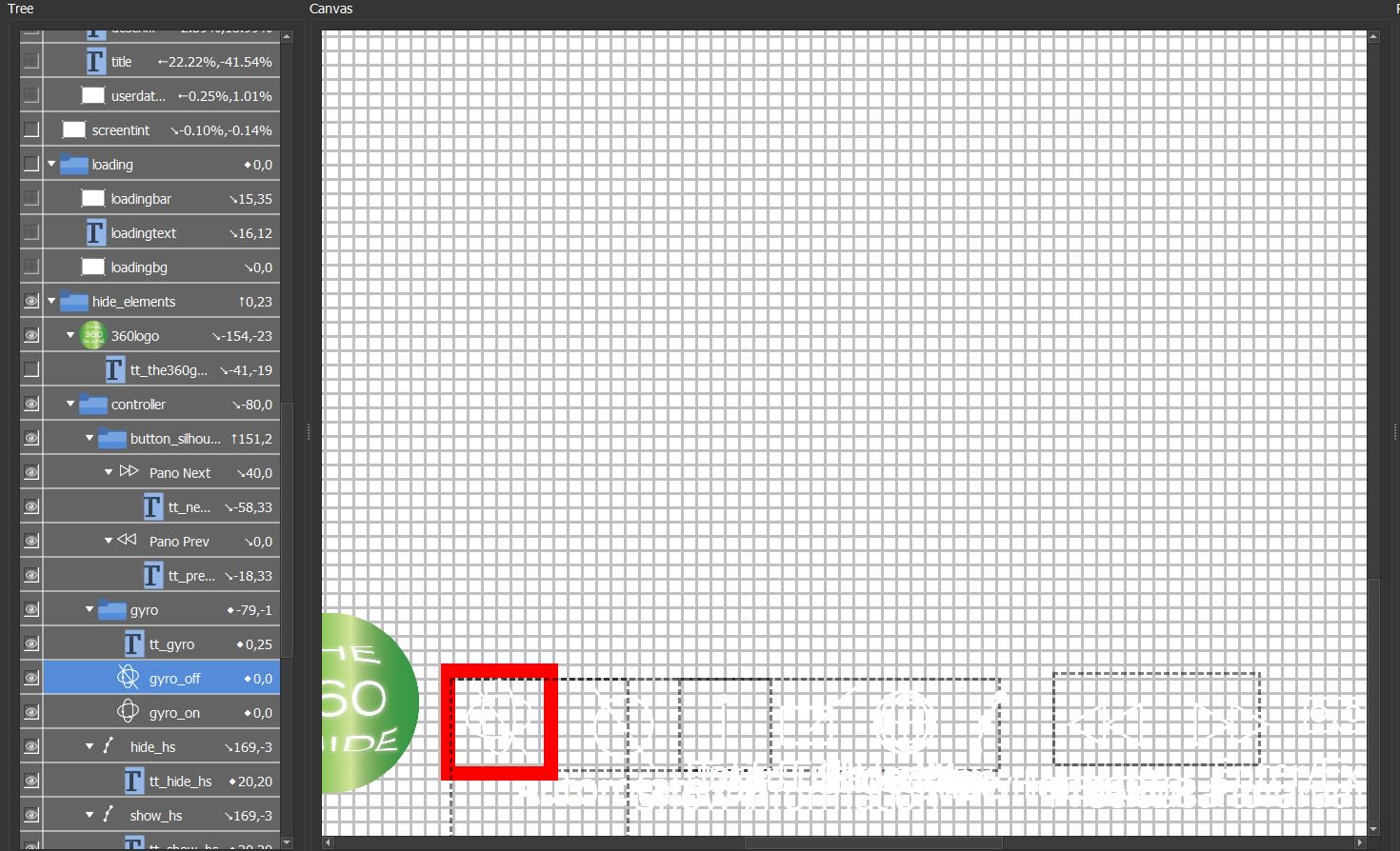 I guess you modified the original skin and mixed up the functions of the special design, that I call: "automatic button positioning".
This design uses variables and action filters and is the base for the "edit skin configuration"

So, if you are not 100% familiar with that "automatic button positioning", you should delete all actions that are using this design, to make shure that no residues are forcing your elements positioning.
Soulbrother - one time in front of the camera
Fotokurse, Fotoworkshops und Panoramaschulungen
Neu in München: Der Irisfotograf
Top

That is exactly correct...I modified the original skin...


Where are those actions for "automatic button positioning" so i can delete them all??

Never seen that before
Top

Hi,
just found a few minutes, so see the screenshot of your skin: 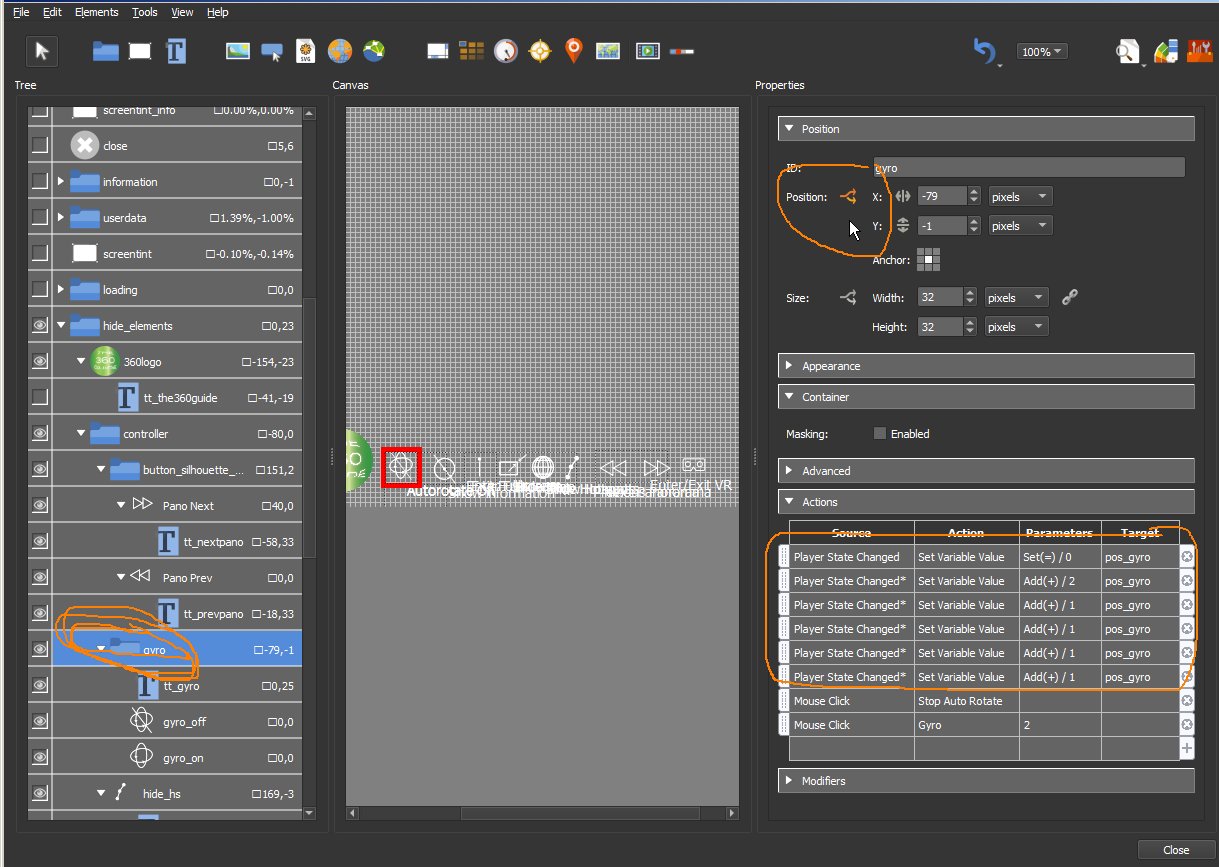 This "construct" is used for that already mentioned "automatic button positioning".

So, make a safety copy of your skin and simply delete:
- the 6 actions lines
- the logic block for the "Position"
- the variable: pos_gyro
- and if not needed: the 5 lines for the "options" variables. 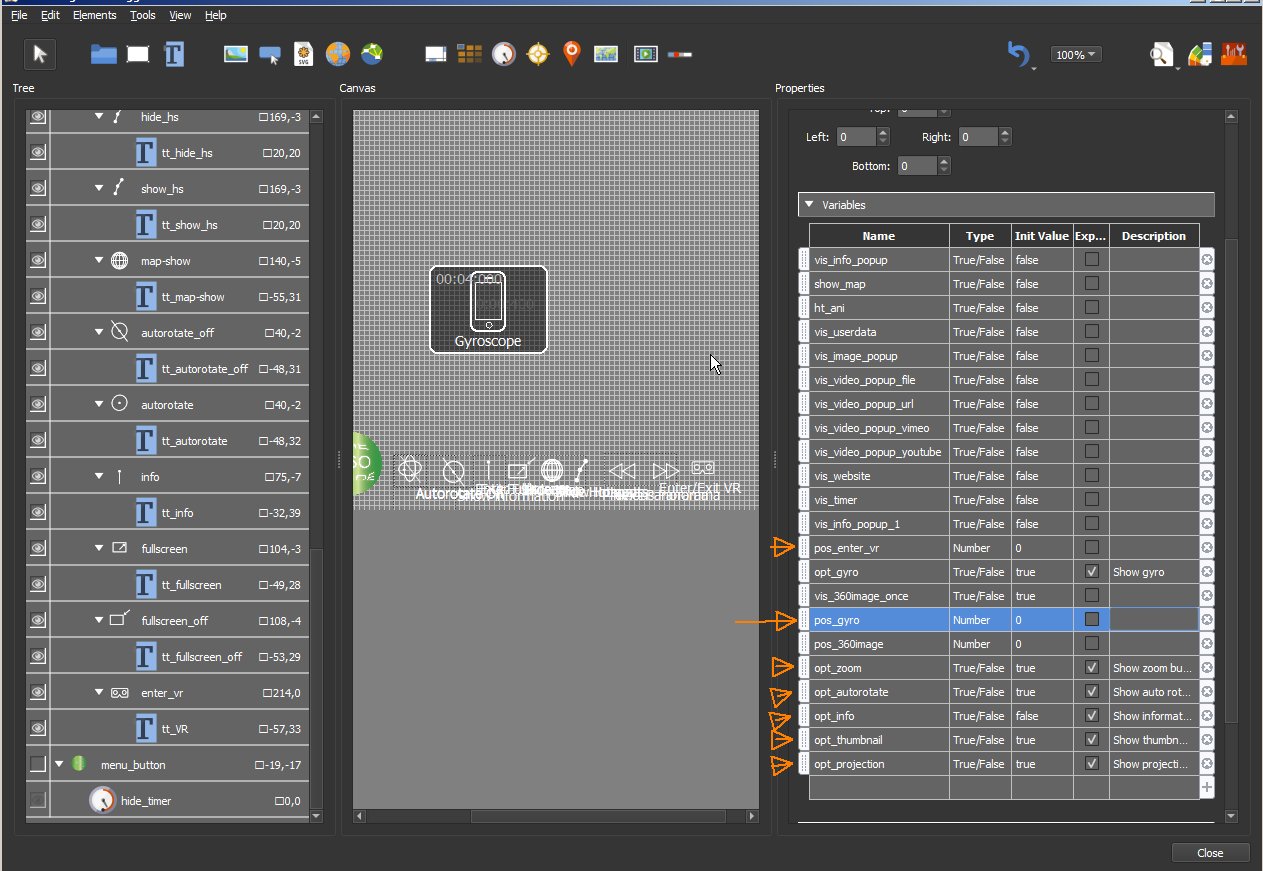 Look also in the button: "enter vr", there are 8 lines with actions, same construct: Those are needed for the positioning, but in your skin you don´t use that. And if you don´t use it, I would also delete, cause it is unnecessary code ballast.

Something is not right...

I did what you said and in one tour everything came great..now I trying with a different tour and it is not working...??

Any reason why?
Top

Hi Guys,
I know this is a little late but if you want to start customising skins then don't use the default _v6 skins.
As it says in the skin if you want to modify it use the Skin Configuration button.


If you want to modify it past what you can do using the configuration button then you are best advised to start a new skin and just add the components you require.
I have been saying this since 6.0, of course, if you are happy in the skin editor then that's great, but if your not a skin junky and don't understand all the variables and logic blocks that this skin uses then I would not do it.

Also, a V6.1 skin opened in 6.0 will brake as 6.1 has new actions not found in 6.0.
What will happen is these actions will be substituted for actions in 6.0 which will be wrong.
So you can open old skins in new builds but not a new skin in old builds.
Of course happy to help if you need it.


Thanks for replying... I am definetly not a skin junky..following your advice I started a skin from scratch and notice the following:

In the attached skin, all the elements seems to be in the same line, however the y-coordinates are different.

I took the actions for autorotation, full screen and gyroscope, and VR from the components toolbox. I copied the other actions from another template. Could that affect the coordinates?

Also notice that all the icons are not really centered once you create the output. Is there a better way to centre the icons?

I saw in other template that a logic block is used for the positioning..is that the approach I should used?,,

I still do not completely understand that logic block...

I also have another issue:

The tour is in the following page:
https://the360guide.com/pano2vr/

I'm also attaching the tour that i watch in my mobile using documents. the same tour (files) that I used to watch it in my mobile are the same files that I uploaded to my website

In your skin the icons of autorotation, gyroscope and full screen are inside containers called, respectively, button_auto_rotate, gyro and button_fullscreen. The icons inside these containers have X & Y positions of 0:0 except button_image_fullscreen which is 1 & 0.

Now all three containers are in another container called controller. Now the controller's X & Y is -118px & -119px.

The controller container is in another container called hide_controller_container and it's X & Y position is 1px & 23px and it's anchor is bottom center.

The map, hotspot and information icons are in the hide_controller_container so their X & Y positions are relative to only that container but their anchor point is set at top right.

The VR icon is in the hide_controller_container like map, hotspot an information but it's anchor point is bottom center.

In the image below I've highlighted all of the containers and pointed to their locations in your skin. This should give you an idea why they are all slightly out of place. (see image below) 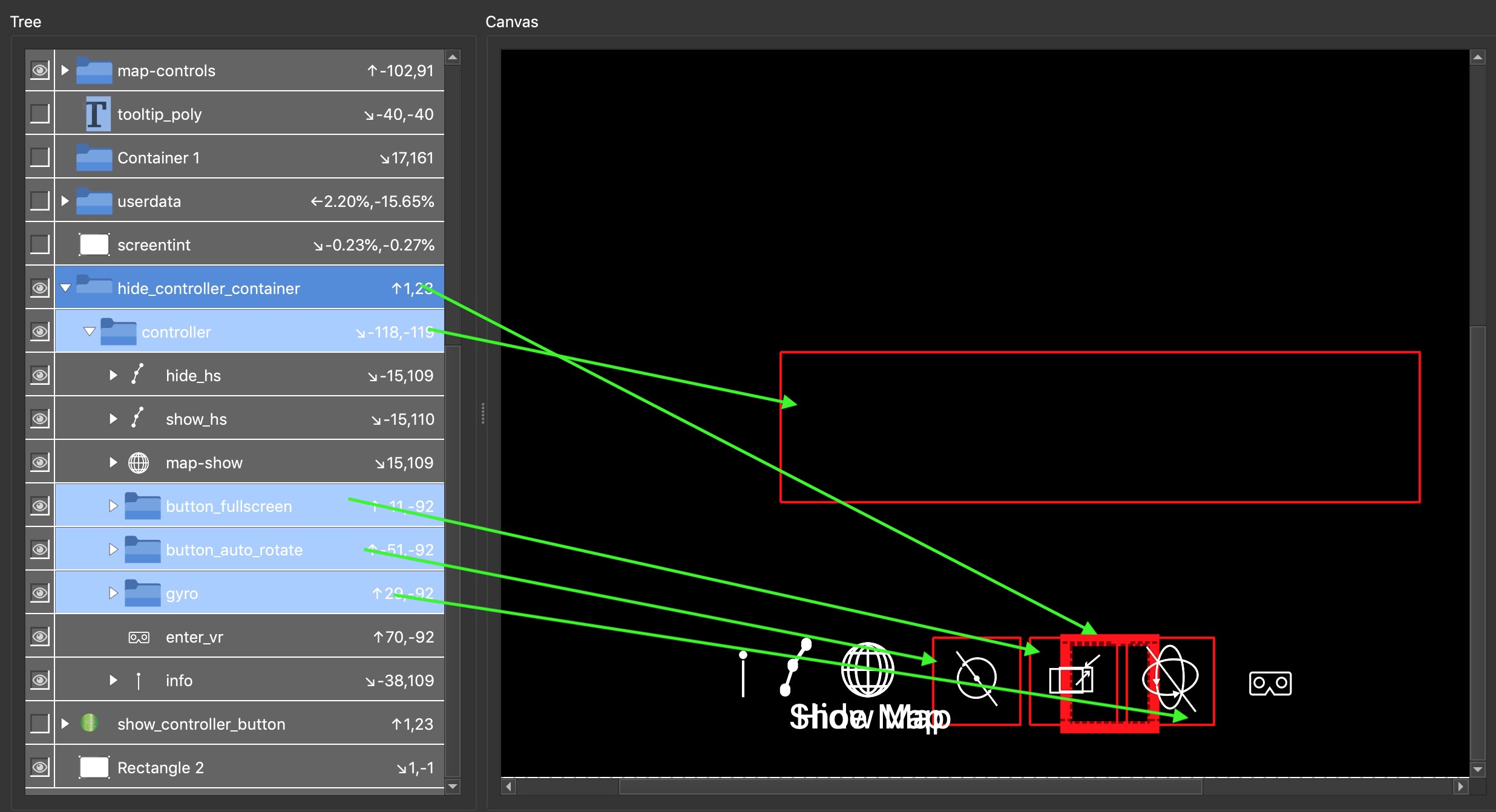 
I've gone through and repositioned all of the containers and elements so they are relative to each other as you move down through the container structure. (see image below) 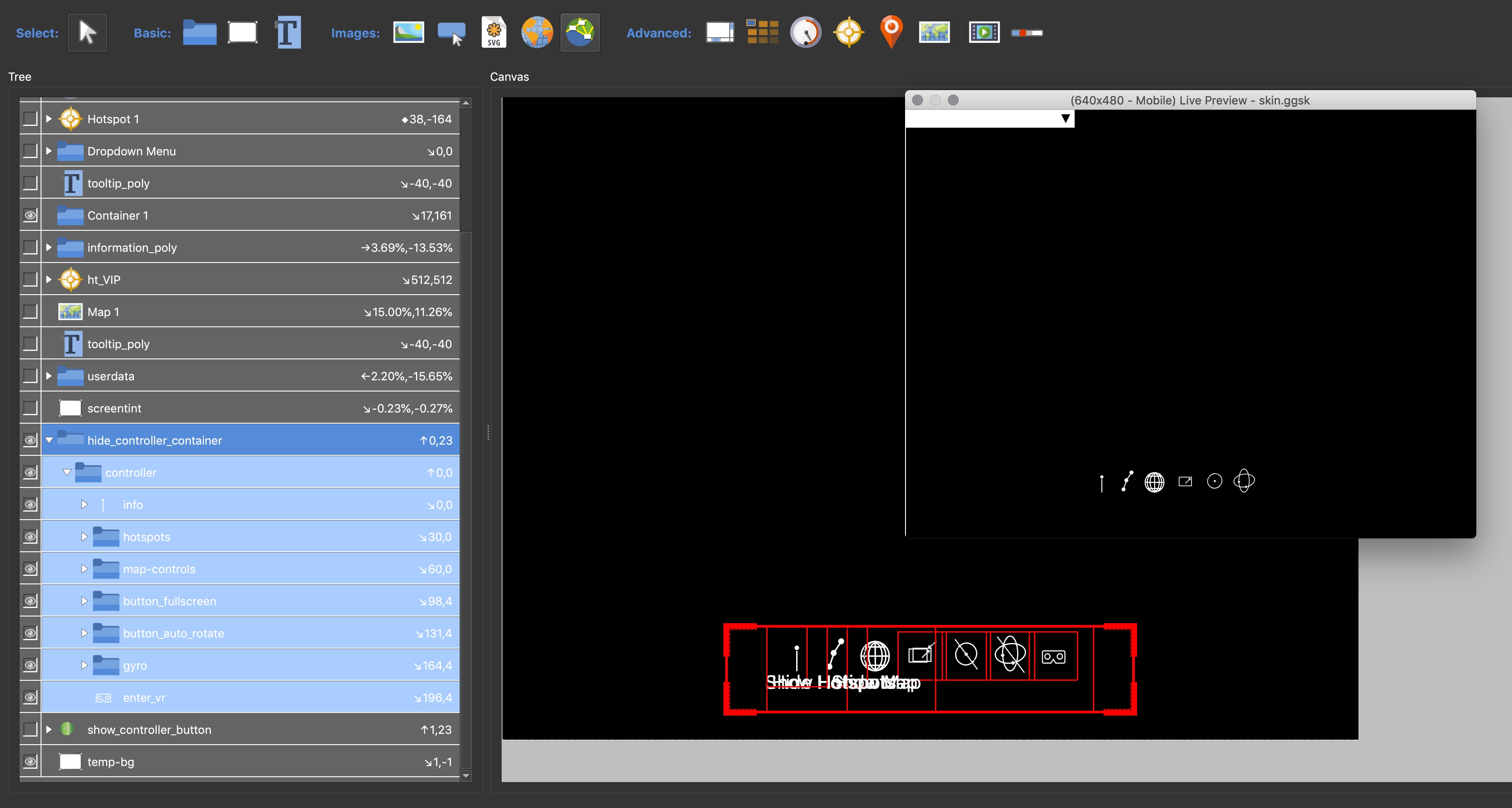 Thanks a lot, it looks tidier now.

There are still two issues now:

1. After your re-arrange the icons, now the action to hide the map is not working. How did you re-arrange the containers?..I was trying to do that, however every time I tried it, I was not able to de-select the files from the containers and then everything moved together, hence, not been able to re-arrange the files.
2. The gyroscope is still not working online (viewed from mobile device on the website), however it works when you run the tour in the app Documents.

I'm attaching the output (the one I watch on the app) and the tour files.

Any assistance would be greatly appreciated.

1. After your re-arrange the icons, now the action to hide the map is not working.

My intention in supplying the skin wasn't to provide a working skin merely an example of how you can arrange the elements. You just need to reapply the actions.

I just started by selecting the hide_controller container, set it's size to 300px x 60px, and centered it on the screen. Then selected the controller container set its size to 240px x 60px, set the anchor to bottom center and set the position to 0px x 0px. Of course everything in it moves off the screen but you just go through each element resetting the X & Y position.


2. The gyroscope is still not working online (viewed from mobile device on the website), however it works when you run the tour in the app Documents.

Make sure you are hosting on a secure site using https:

Thanks for the clarifications...

Regarding the Gyroscope, I am sure my site use https: ... is there any other reason why that function could not be working?
Top

Given that we have clarified the issue about the position for the icons in the screen and the skin editor, I considered that this post is concluded. I will open a new post for the discussion of the gyroscope.
Top
Post Reply
13 posts • Page 1 of 1