What is Viewstate Change option in skin editor?

by k.ary.n
This is used mainly for Object2VR skin projects when an object has multiple view states like this.

by Asperix
thanks for the reply, but I do not understand this

by k.ary.n
When building a skin for an object movie, you may want to show different versions of the same object. In the example I posted, it is a 3D rendering of a car and its different colors it may be available in. Each of these different color renderings are View States. You can use the the skin editor to load each of these View States which are defined in the project (Light Table or Select Input). In the State field, you would add the number of the State you wish to target.

This image shows the image/button that is used to represent the view state: 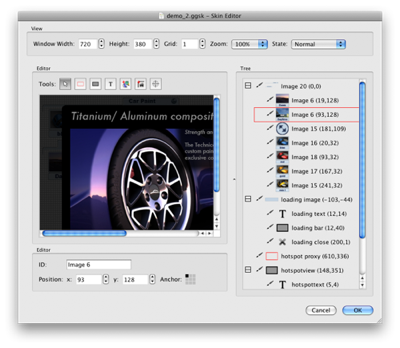 And this image shows that when the user clicks on this image/button that the view state should change to state number 0 with a speed of .05 second:

I hope that clarifies it. So you see, it's really an Object2VR action and not a Pano2VR action.

by UKMacnut
Hi-
I am making an Object2VR using flash, and with a car also. As in this example, I need to change the car colour with a viewstate. However, I am also changing the wheels. So, there are several viewstates for each colour. I just want to change one thing at a time so I cannot redirect to a specific viewstate. I need to figure out which viewstate I am in first, then redirect. In Mark Banas Object2VR example, there is the same problem- changing environment also changes to a blue car, changing the car colour also changes the environment to daytime. So, can I add some code to the skin? What should I write? Something like this?
if (viewstate=0)
{
var viewstate = 5;
}
else if (viewstate=1)
{
var viewstate = 3;
}
else if (viewstate=4)
{
var viewstate = 2;
}
</script>

by thomas
You can not add code (yet) but you can use a trick. You can use several buttons for the wheel & color combination, place them over each other and hide/show them with the view state click to match the current state so that only valid paths from your current state are possible.

by ms123
Is there a specific way of naming the input files? Can anyone please explain how the files should be named.

by Hopki
Its bed time, if no one gives an answer I will tomorrow.

by Hopki
To help Object”VR I use a two digit numerical naming system.
Robot being the name I gave to my project images.