I want to be able to tell it hide or change visibility in the skin but I do not know where in the skin the polygon hotspots are addressed. All their values are set in pano2vr and not the skin editor as far as I can tell.

Can you send me the skin? Or a link I can have a look at and I'll see if I can find a solution.

Hi Tony, thanks for offering to take a look. I have attached sample project and skin to this post.

All resolved, I've uploaded the output file to https://tonyredhead.s3-ap-southeast-2.a ... index.html

and there is a Project folder you can download at https://tonyredhead.s3-ap-southeast-2.a ... p_tony.zip

I think the issue was the use of existing hotspot components and their elements. You will see that I've created unique versions of the polygon popups along with variables just for their use.

I've also added in some settings where the polygon colors are changed at startup and they are hidden when they are clicked on.

Hi Tony, thanks so much! - This is great. The only issue I am having now is when testing it on an iPad, PDF's that open in the iFrame don't really work. They just show the first page. Before I had it so that if a device had touch it would open in a new window. I used the logic block from the default ht_url to make this happen. I have tried adding this to the Actions in the WEB-URL container, but have no luck getting iFrame to open in new window.

I would like all iFrame on iPad (iOS) to open in a new window, just to be on the safe side. I don't know what I am missing to make this happen.

Okay new version online for you to take a look at: https://tonyredhead.s3-ap-southeast-2. ... ndex.html

On the desktop, it opens the iframe into the same window on a device with 'touch' it opens in a new tab.

I've created a new variable, 'opt_url_ipad', that is used in conjunction with the polygon hotspot.


I've exposed the variable so it's can be toggled on and off in the 'Edit Skin Configuration' window. It's set to on by default. If you don't want it to open a new tab in the iPad just uncheck it. 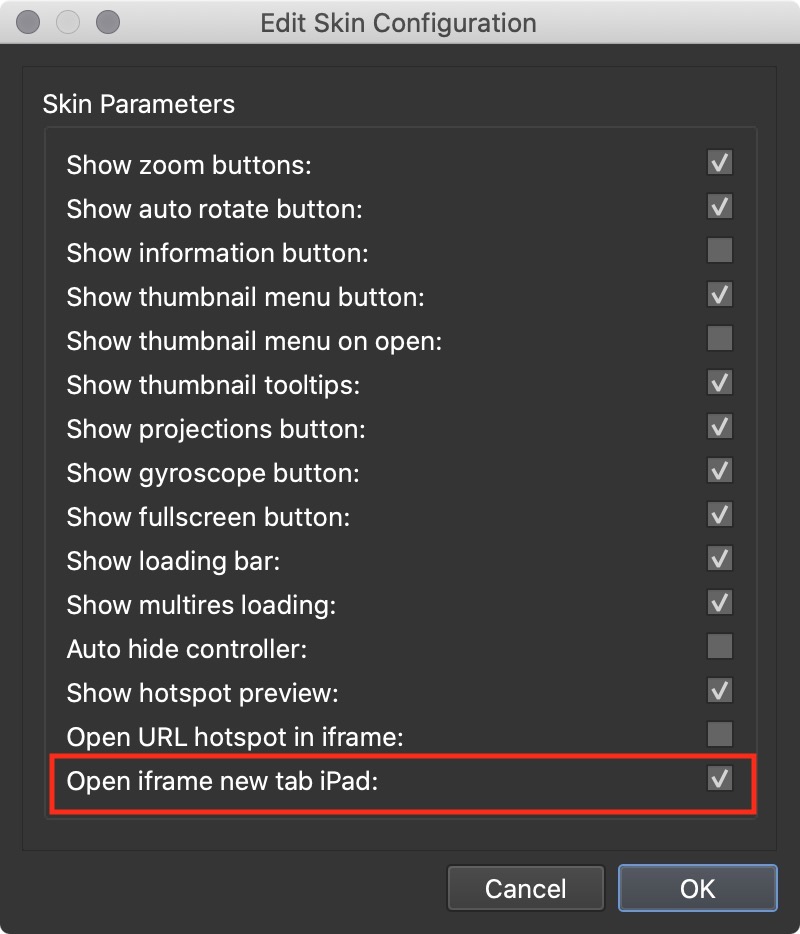 
I've attached an updated skin file, just replace the old one with this one.

Hey Tony. thanks for the updated project. I was just testing your link and noticed that on my iPad when the Web URL polygon is pressed it opens a new tab with the URL in a full page, but it also launches the URL in an iFrame in the original page.

So I found a way to keep the iframe from opening in the original browser window. Not sure if it is the most elegant way to program it - so definitely open to hearing other options. In the WEB-URL container, I added two mouse click actions that change variables resulting in the iframe closing. So I think what is actually happening is the iframe probably opens and then closes right away, but the user will never see it because it is covered by the new tab.

Is it alright to have this many Actions on one element in a skin? Seems to be a lot going on here.

Oops, didn't look at the page under the new tab

Try this link and let me know if this is working on iPad and Desktop:

Had to add another variable to manage the status of the iPad.

Hey Tony so that is working now - but of course now I have another issue. Everything works great on the desktop. On the iPad, once I click a polygon hotspot, it opens a new tab (which is great), after I close that tab and go back to my original window, the polygons do not display the tooltip anymore. They still hight light when I press on the screen, but the tooltip is gone.
Top

Yes, the issue was that we were hiding the tooltip but on the desktop, you have the close button to reset it. Now it doesn't hide the tooltip if you are on the iPad opening in a new tab.


Check out the new skin KR_silhoutte_3.ggsk