Hi,
We had a request asking how to make Polygon Hotspots Multilingual.
So I thought I would share the project which can be found below.

Firstly this project has two languages, English and German but it will be able to have as many as you require.
There is also a text variable that changes the text in the buttons/text boxes.
The text boxes also have text logic blocks to change the text when the variable is changed.

Open a project and add the first Polygon hotspot, this will be the English Hotspot and will have its Hotspot ID changed, I am using Poly_EN. All the English Polygon Hotspots will have the same ID, Poly_EN. 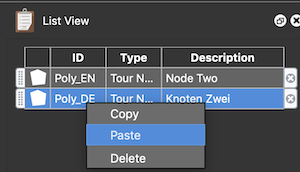 
In the copy change the Polygons ID to reflect the language it will be in, this project is using Poly_DE.


Do this for each Polygon Hotspot so you have a copy for each language. 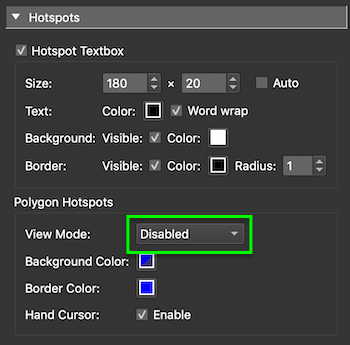 
Open the skin editor and add a text variable, I am using the name: var_lang.


Now add two text boxes to the skin, these which will be the two buttons that will change the language.
They have the ID's "en" and "de". There is also a container around them with the ID "language".
The container "language" has the action: 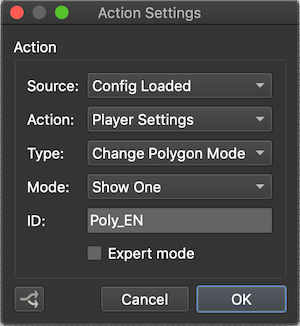 
What this does is on output open, will show the Poly_EN Hotspots while the Poly_DE Polygon Hotspots are hidden.

For the buttons that change the languages, they have three actions each.
Looking at the English Language button the actions are: 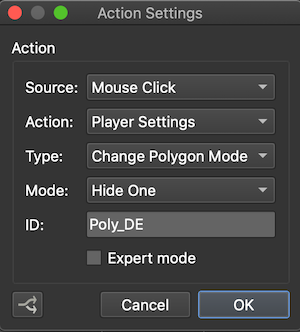 
This action hides the Poly_DE Polygon Hotspots if they were showing. If your project has many languages then you would need more actions like this to hide all the other languages other than the one this button will show.
You can also use regular expressions so this one button can hide many. 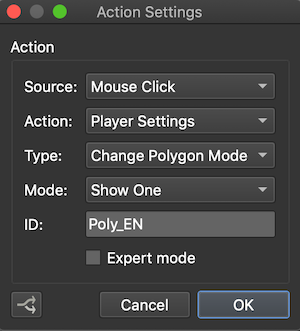 
This action shows the Poly_EN Hotspots. 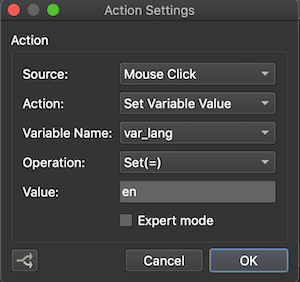 
This action changes the variable vale to change the text in the buttons.
The text box loci block looks like this:


If you are using flag graphics, you can use the variable to change the Alpha of the non-active language to fade it out slightly or change its scale as an example.

As you can see you can keep on adding different languages if you need more.
The text box with the ID "de" will have the actions swopped around.
So the button will hide Poly_EN, then show Poly_DE and change the variable to "de".

Save and close the skin and then build the output.

This project shows the Polygon Hotspots so you can see them. If you want them still clickable but not visible, then you will need to go back the HTML5 output and Hotspots tab.
Open the colour picker for the Hotspots Background colour (1) and set the Alpha to 0 (2) then do the same for the Border Colour (3). 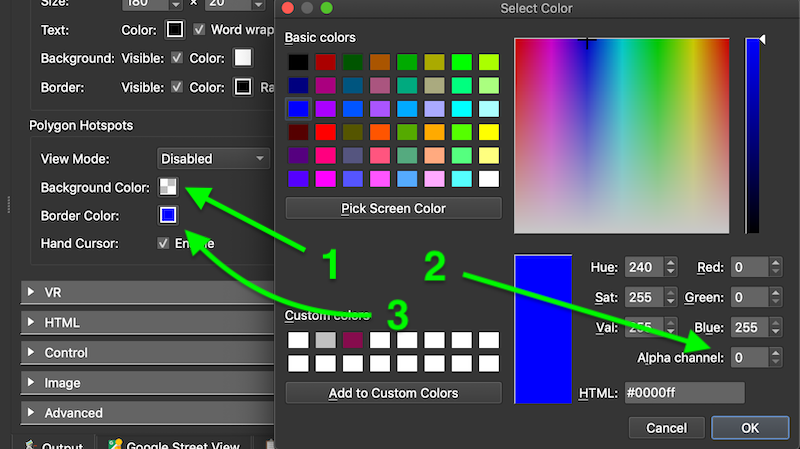 Hopki
Garden Gnome Software Support
If you send an e-mail to support please send a link to the forum post for reference.
support@ggnome.com
https://ggnome.com/wiki/documentation/
Top
Post Reply
1 post • Page 1 of 1