Hi, this is my first post, so I apologize if the forum category is not accurate.

I'm trying to create a "Video tour", for which I mean a Tour where I mix some panoramas and 360 videos. For example, I want to show a host that introduces the zone and shows the things available while you drag and drop to see around.
I followed the instructions in https://ggnome.com/doc/pano2vr/6/video-360-tour/, being these just adding the 360 videos (already converted to equirectangular format externally) as well as the stills

When I preview the tour I get unexpected behaviours like getting the video stage again and again, even though I move through hotspots to different panoramas.
The strangest thing is that the "configuration" seems to be from the other panoramas (hot spots are different), but instead of viewing the image from the others, I keep getting the initial video.

I have uploaded an example to https://visita360.de/demo/video-tour-pano2vr/
I am using the latest available version (Pano2VR Pro 6.1.2)
Top

Hi GGail,
What resolution is the video?
Use something like HandBrake and make the video 2048 x 1024px and set it for the web for streaming. 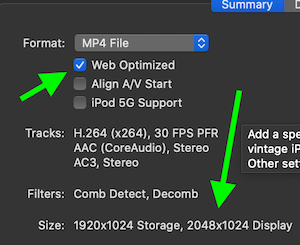 
The setting for the web tells the browser to start streaming the video rather than wait for it to download, so speeds up when it starts to play.
Regards,
Hopki
Hopki
Garden Gnome Support
If you send an e-mail to support please send a link to the forum post for reference.
support@ggnome.com
https://ggnome.com/wiki/documentation/
Top
Post Reply
2 posts • Page 1 of 1