There is the ability for showing checked boxes for visited nodes. I am wondering if I could create one sort of counter for visited/or activated hotspots. It should be used for different hotspot types.

So when started, the counter should say for example:
0 / 8 where 0 is for the fresh start with none activated spots, and 8 for the available spots.

When clicked on one of the spots, the 0 should become 1. Does this make sense, and could this be created with a text element in the skin editor?

Thank you in advance for your thoughts.

The idea is to show the visitor of the tour how much of the tour is explored (i.e. 5 of 8 hotsphots are visited, 3 of 8 are not.) Hopefully this is something one of you have already worked with.
Top

Hi,
I have found a very old project but having a quick look at it, it raises questions.

You could have a bar that has all the nodes listed and the nodes change colour as you have visited them.
Of if you want like a fule gauge type thing where it just goes up, but no indication of what nodes you have not seen.
But this is for nodes of a tour.

Your question is referring to hotspots in one node? or hotspots on many?
Regards,
Hopki
Hopki
Garden Gnome Support
If you send an e-mail to support please send a link to the forum post for reference.
support@ggnome.com
https://ggnome.com/wiki/documentation/
Top

Thanks for your reply. I am looking for a fixed number of hotspots. For example 5. They are situated in one node. I try to create a game where visitors have to find and activate 5 spots which open an image in a pop up window.

Do you think this is possible? I’ve seen something with a colores bar before as well. I don’t know how that was built but that could be with nodes instead of hotspots.

Thanks for your efforts Hopki. I hope you can point me in a direction.

Here's something I'd made a while ago. It could certainly be modified to open an image once the hotspot count had reached the desired number. 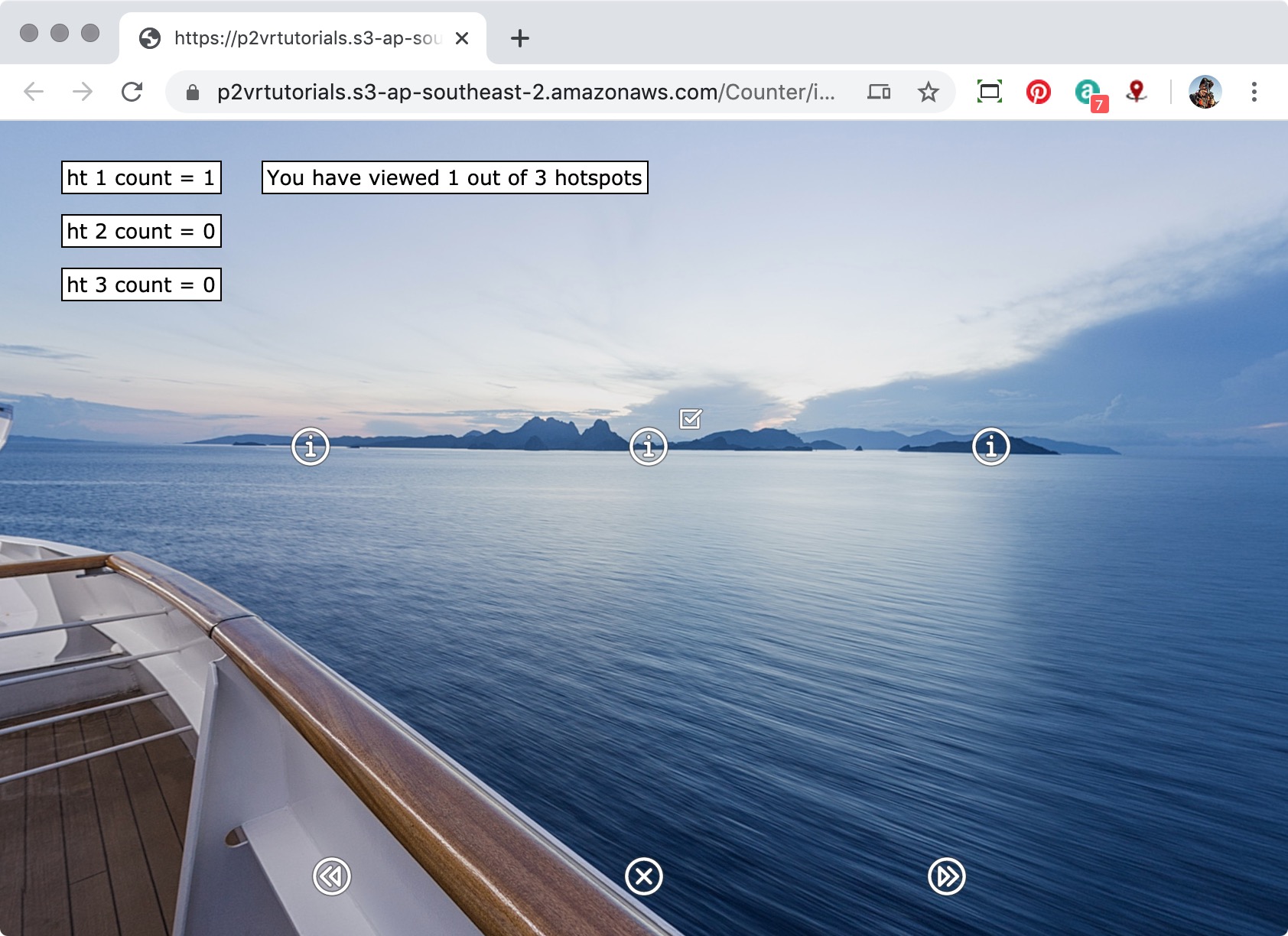 I just updated the project to add in a popup image at the end.


When you click on a hotspot an info window pops up, you have to click the close button to hide it. After all three hotspots have been Mouse Clicked the 'reset' button is displayed. The third info popup close button triggers the image popup.

Hi Kevin,
Yes, if you found what I think you did that was a tour progress indicator.

For your request, please see the attached project.
How it works:
Open the p2vr file, you will see four, point hotspots.

Open the skin:
The skin has the variable *var_count which is a number logic block.
Rectangle 1 is being used as the popup. It has a visible logic block that states that when the variable, *var_count equals 4 then visible, true.
Text 1, is just being used to show what the variable number count is and can be deleted.
The Hotspot Template does not have any actions.
The container, click pad which is a child of the template has the actions:
Source: Mouse Click
Action: Set Variable Value
Variable Name: var_count
Operation: Add(+)
Value: 1

Then when clicked will add 1 to the variable number.

So what will happen is when it clicked it will add 1 to the variable and then hide, so can not be clicked again

Please note the container has had permeable deselected so its an active element. It also has Hand Cursor so when it hides the mouse courser no longer shows it once the hotspot has been clicked.

The element ht_image_count, has no actions and is just there for show as teh container is transparent.


To reset I have added actions to Rectangle 1 that resets the variable to 0 and shows the container, click pad.
Regards,
Hopki

Thank you both for the different approaches. I'll try to implement one of the two in my project. My preferences is going to the first one because that was something I had in mind in the beginning.

Though I will look into the second one with the bar before I'll start, just to see how that is built.

Thanks again for all the efforts. When I have any question I'll let it know here.

I’ll post some steps and provide you the whole project and skin to work from.

Thanks that will help. Look forward for your step-by-step.

At this moment I am working with Hopkis file. The hotspots are point hot spots. I'm trying to let polygon hotspots do exactly what the point spots are doing. Is there any chance I can let Polygon Hotspots act like the point hot spots? Where I can i.e. open an image in a pop up?


Is there any chance I can let Polygon Hotspots act like the point hot spots? Where I can i.e. open an image in a pop up?

In this tutorial the polygon hotspot opens an information popup but it could just as easily be an image popup.

Super thanks. This is what I was looking for!

So I combined the tutorial from Tony with the var_count from Hopki. Now I am able to add +1 to the counter with the polygonic hotspots. I've created a few proxys in order to create a counter for each polygon hotspot. I need 5.

Thing I am working with now is the following:
The polygon hotspots are adding +1 to the counter. For every click on it. I can use one hotspot to hit my desired number for completing the counter.

Is there a way to deactivate the status of the proxy containers after the first mouse click? Or may be disable the polygon hotspot on a different way?
Top

You can add an Action to the element you are using for the Hotspot Proxy ID. 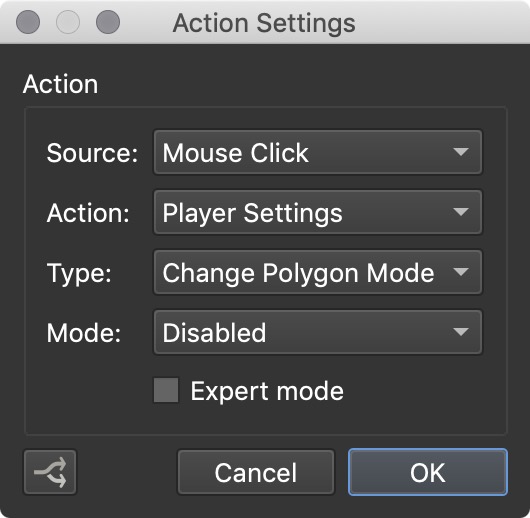 Hi Guys,
Setting the Poly Hotspots to Disable will disable them all!

It has polys showing by default so you know where they are.
They are using the default Hotspot ID's Poly01 and Poly02.
In the description text field is A for Poly01 and B for Poly02.

In the skin, there are three variables. There is a True/False variable for each Polygone and a numbered variable for the counter.


In the skin is a container with the ID: PolyHSTrigger
Under the "Hotspot Proxy ID" I am using the wild card "*" without the quotes. This will activate with ANY mouse click for ANY Hotspot be it Point or Poly.
But this does not matter as the actions detect if you are clicking a Poly Hotspot so would not be affected by any Point hotspots.

The container PolyHSTrigger has two actions per Poly Hotspot.


The above screenshot shows the actions for the two Poly Hotspots.

Looking at the first action for Poly01. 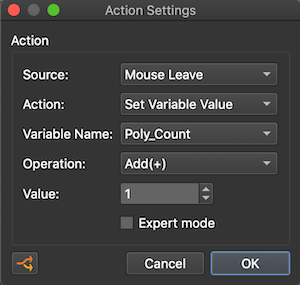 
On click will add 1 to the variable "Poly_Count" but only when you are clicking poly01.
It does it by using the action filter. 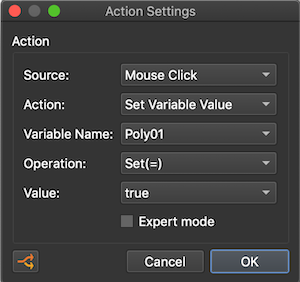 
This sets the Poly01 Variable to true, so once clicked it can not be clicked again.
But to make it so this only changes when you click Poly01 it has an action filter.


So it will only change the variable to true if you click the Poly Hotspot with A in the description which is only Poly01.
To add more Poly Hotspots to the project just copy the two actions and paste a new pair for each new Poly Hotspot and add more variables.

The popup is using a visible logic block that says when the Poly_Count = 2 visible true.
This is the same for the screen tint and close button.

The close button has the actions to reset all the variable so you can try the project.

Finally, the text boxes are used to show the state of the logic block for testing and would be deleted when you have finished the project.
Regards,
Hopki