by 1uv3
It seems that I am the first with a question about the glorious snow effect. Looks fantastic on mobile devices as well. Great job

In the "Snow Code" it says

to start and stop the effect, you can use a 'Go to URL' action and put the following piece of code into the URL field: "javascript: startSnow();" or "javascript: stopSnow();"

I obviously have no idea what I am doing here

Could someone please show the proper syntax for as example, to turn off the snow for node 2.

by Hopki
Hi,
In the attached project I am using a Node Marker.
I just tagged the node/s that should not display snow with "stop_snow".
The Node Marker then has the tag set in its properties. 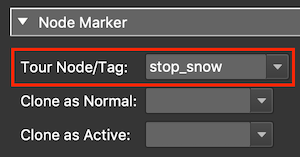 As the pano opens with the tag stop_snow the Node Marker becomes active and the URL Javascript call stops it.
When you move to a pano without the tag the Node Marker Deactivates so calls the Deactivated action to start it again.

If you do not want the snow to start on open, then in the text box "snow_code" at the top you will see:

by soulbrother
Hi Hopki and thanks for your fast answers.

Is there any way to hide the snow, while a fly in is active and ideally to fade in the effect either after the flyin is finished, or after a defined time (via timer)?
)I already tried to modify alpha of the image, but it does not show an effect.

The second wish (yepp it near to Xmas, so I write wishes here...):

Is there a possibility to use 2 of the snowflakes at the same time?

Like that in the screenshot, but I did not get it running...
Of course I treid several "usual" modifications, like different names and changing the names of the image inside the code, but no way... 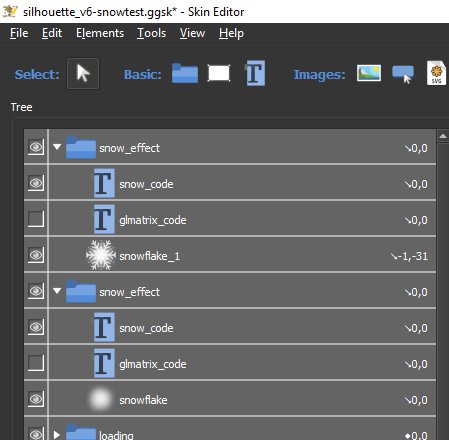 Hopki wrote: ↑
Thu Dec 20, 2018 12:42 pm
Hi,
In the attached project I am using a Node Marker.
I just tagged the node/s that should not display snow with "stop_snow".
The Node Marker then has the tag set in its properties.

Is it possible to make the snow effect appear IN FRONT of pinned objects? If so, how is this accomplished?

by Hopki
Hi Guys
@ soulbrother:
You can not for the moment, to keep the speed its one graphic which we then use the texture.
This is processed in GPU so no slowdown.


@1uv3:
Again not at the moment.
The snow effect has been a bit of a distraction from the normal development path but I know the developers still have some ideas for it.
What and when is down to the devs.

The snowFX worked fine for this year season greetings: http://xpoisure.com/seasons-greatings-2018/