I've created standalone versions of a tour in the past using the instructions here https://ggnome.com/wiki/Creating_a_Desktop_Application

I recently tried to update the standalone tour like I have in the past by copying the appropriate files but when the tour starts, it's as if it doesn't have all the needed information.

For example, I use the text entered in the Description field to display information about the current panorama in a window when the user clicks the info button. The window appears but without the text.

I use Title to hold the name of the current panorama and display it on a controller within the skin but the text doesn't appear.

Also, I use a component to show node thumbnails horizontally at the top of the screen with a small icon to represent visited nodes. The thumbnails appear and are clickable but the visited icon does not appear once a panorama has been visited.

It's as though some or part of the xml file isn't being read because I looked at the xml file and the info in there. The skin is correct too.

Here's the only thing I can think of... The tour was built using the current version of Pano2VR 5 on a Windows 10 PC. The two computers that the tour "semi works" on are running Windows 7. I copied the files to a Windows 10 computer and it works.

I'm not even sure where to begin to look or what to try in order to solve this.
Thank you!
Tony
Top

Update:
I had a previous standalone version of the tour working on a laptop so I decided to copy files from the new version individually while checking the tour in hopes to find which one breaks it. The culprit appears to be the skin file. The version which is working was generated with Pano2VR skin editor version 5.0 and the version not working was generated with 5.1. I haven't had time to compare the files. There were no major changes between the two skins so I'm curious to know what may be causing the issues. The tour works flawlessly when running through the local host. It just seems to have a few skin related problems when running as a standalone through NW. Keep in mind this tour also runs fine as a standalone using the new skin file (5.1) when running on a Windows 10 laptop. The other laptops are Windows 7. Update: The tour now is doing the same on the Windows 10 laptop as it was on the Windows 7 laptops. Nothing changed from the installation on Saturday. This is really strange.

Also, the only thing that doesn't seem to be working now in the standalone version is the map. It just says "Map goes here".

Any thoughts?
Thanks.
Tony
Top

Hi Tony,
The NW-JS project also had some updates that I think broke it.
I tested a project that did work with the older software with 5.0 and I got popups working.
Rebuilt with the same file but newer NW-JS software and now they don't

I have asked for the developers to look into it.
That said why not just use our package viewer, we produce the software so it will work, the NW-JS is third party and out of our control but was good to make a desk top app.
With the package viewer installed you can just output ggpkg's and then double click to open them.
Regards,
Hopki
Hopki
Garden Gnome Software Support
If you send an e-mail to support please send a link to the forum post for reference.
support@ggnome.com
https://ggnome.com/wiki/documentation/
Top

Hi Hopki,
Thanks for the info on NW-JS. Honestly, I've been away from the forum for awhile and wasn't aware of the package viewer. My client requested a standalone desktop version of their tour about a year ago and NW-JS was the choice then. I've made updates to their tour and just proceeded to use the same method. With that said, I'm using the older version of NW-JS. I'll have to check out the package viewer. So it does the same thing as NW-JS?

Hi Tony,
Not exactly the same as the package viewer is want the name suggests a local viewer.
So your customer can download it from our site and install it.
Then all you have to do is send then the package output which is single file.
They then double click on the package to open it.
However the good news is the file size is much smaller if your only sending the package.
Regards,
Hopki
Hopki
Garden Gnome Software Support
If you send an e-mail to support please send a link to the forum post for reference.
support@ggnome.com
https://ggnome.com/wiki/documentation/
Top

Regarding GG Package Viewer, I downloaded it but haven't installed it yet. I tried creating a ggpkg using instructions at this link http://ggnome.com/ggpkg but Pano2VR crashes during the build.

Hi Tony,
The best way to make a ggpkg is make an output as normal, then just click the Make package button.

BTW you can also drag and drop in the output folder in to the package viewer.
Regards,
Hopki
Hopki
Garden Gnome Software Support
If you send an e-mail to support please send a link to the forum post for reference.
support@ggnome.com
https://ggnome.com/wiki/documentation/
Top

Hopki wrote:The best way to make a ggpkg is make an output as normal, then just click the Make package button.

This is what I tried. I already generated all the output (clicking the gear button) and that works fine but when I click the package button, it attempts to package the tour showing the progress bars but then becomes unresponsive and the dialog title bar says "Not responding" then I have to terminate Pano2VR. I checked HTML and chose the ggpkg template before attempting to create the package.
Tony
Top

Hi Tony,
Don't select the the ggpkg template, leave it using the normal template and try it.
Regards,
Hopki
Hopki
Garden Gnome Software Support
If you send an e-mail to support please send a link to the forum post for reference.
support@ggnome.com
https://ggnome.com/wiki/documentation/
Top

Same thing happens. The application goes through some of the process but then freezes (see dialog box screenshot below): 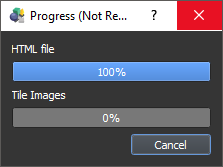 Hi Tony,
Is there any large media files or popup images other than the panos?
Regards,
Hopki
Hopki
Garden Gnome Software Support
If you send an e-mail to support please send a link to the forum post for reference.
support@ggnome.com
https://ggnome.com/wiki/documentation/
Top
Post Reply
11 posts • Page 1 of 1