by panovrlover
We've created a few tours now for the Gear VR, but are really just using it as a cardboard player by disabling the Oculus software in the S6/7 and setting the standby time to 10 mins on the phone.

We are using the Cardboard template, and using tiles to try and get the best resolution. Are there any tips for getting the best possible resolution and quality for use in the Gear VR or the Cardboard headsets? Some clients have come back and although they're happy, they want better quality. I just want to make sure we are supplying them with the best quality possible through these headsets.

by 360Texas
We are using a Samsung Galaxy s7 edge with Gear VR and the optics are not very high quality.

Sort of like looking at a high quality panorama image through a door with insect mesh screen grid.

I am not impressed with the Gear VR optics either.

I have not found any replacement glass optics.

by 3DV
According to Oculus, the best resolution for the Gear VR is using a tilesize of 1536 pixels for cube images, with a FOV of 90 degrees for S6/S7, around 96 for Note4.

360Texas: are you referring to that 'insect mesh screen grid' as seen in every Oculus app? Ie: device related, or in some apps specifically?
I've seen that screen when viewing equirectangular (4*1536 x 2*1536px) images in Samsung 360 Photos app for example, horrible aliasing.
But when using 6x1 strips (6*1536 x 1536px) the quality is much better. That probably has to do with the sampling method used by the 360 Photos app. But when I use equirectangular input in Pano2VR and let Pano2VR output to 1536 tiles, I get a good quality image in the VR Tourviewer app. Ie: Pano2VR does a much better job at resampling the image to cube faces.

by 360Texas
That would be Samsung G s7 edge and using Samsung Internet Browser -version unknown because can't find "Help/ about" in the browser menu.

Yes, I too noticed that when I create an Equirectangle .jpg single image panorama then put it in my s7 Oculus/ 360Photo /myfolder I can view it while in Oculus 360Photo It looks alot better. They don't tell us what viewer they are using to project my jpg.. so its hard to know what's being used. Can't make any viewer comparisons because I do not know what their viewer is named.

I tried googling for "User manual" for the Samsung Internet Browser. Did't find any information other than the S Internet Browser seems to be sourced from Mozilla module set.

Regarding your thoughts on image converted to Horizontal strip, an original equirectangle spherical panorama sized 6144 pixels wide x 6 cube faces 1536 x 1536 px should provide good resolution. I did not know that we could provide 360Photo with a 6 tile horizontal strip. I thought it would only use a 6144 w x 3072 h single equirectangle panorama image. If correct.. good to know.

When you mentioned tile size of 1536px I initially thought you were talking about Pano2vr's multires feature.

And a Oculus FOV of 90°? They must be talking about a cylinder image taken with a zoom lens.

FOV in Pano2vr software means a zoom in setting. Pano2vr FOV range is 5 zoom in MIN -> zoom out MAX 120 degrees angle of view. Its a setting that ends up in the .xml file. The FOV angle of view on the horizon of 90° can't be controlled in a fisheye lens when taking the picture because the fisheye lens has a fixed angle of view of 180° from left to right & top to bottom side of lens glass.

This is a good conversation... thanks !

by 3DV
With FOV I only meant the field of view as measured from the eye to the edges of the Gear 'screen', not a FOV for photographing imagery for VR.

I'm using the Image > Single Res output of Pano2VR with a tilesize of 1536 to generate the cube sides for viewing with the Tour app, which works well. You could use the same technique to convert equirectangular images to 6 cube faces and stitch them together to a 6x1 strip format for viewing in the 360 Photos app. You can even put two 6x1 strips next to each other in one image for stereoscopic images, resulting in an 18K image.

Actually Pano2vr is an image converter. So you can convert the equirectangle image to a horizontal strip and provide the cube face tile size like 1536px.
The horizontal arrangement would be cube face image # 0 - 5, or 1 - 6 there are several configurations to choose from.

You would have to create 2 horizontal strips for stereo ? ... maybe photoshop them together. Not sure how that would play out.


You could use the same technique to convert equirectangular images to 6 cube faces and stitch them together to a 6x1 strip format for viewing in the 360 Photos app. You can even put two 6x1 strips next to each other in one image for stereoscopic images, resulting in an 18K image.

Horizontal Strip were different compression #1 = about 6m #2 about 13mb. I wanted to see if jpg compression was a Gear VR degradation factor.

Mounted s7 into Gear VR and proceeded to the 360Photo area.. selected My Photos from the menu and opened #1 6mb image.

Observation: The cube face sequence order created with Pano2vr were not the order 360photo was expecting. So what order does 360Photo's require ? At this moment No clue - lack of documentation.
The bottom cube face image was displayed vertical... and remaining cube faces were displayed in various locations around the spherical panorama. Cube face sides were out of order.
There did not appear to be any observable image quality differences between the 6mb and 13mb. Meaning sharpness and color balance.

Next step: Use only higher non compressed equirectangle JPEG's when viewing with Gear VR Oculus 360Photo.

by 3DV
It's indeed not very straightforward (and that's an understatement...)

The strip has to be formatted in a specific order. Also, you have to mirror the original equirectangular panorama horizontally before converting to cubefaces with Pano2VR.
From Pano2VR output, cubeface numbers 0-5, use the following order to combine a 6x1 strip: 0,2,4,5,3,1 - cubeface 4 needs to be rotated 90 degrees counter-clockwise and cubeface 5 needs to be rotated 90 degrees clockwise.
If you output to the optimal size of 1535 square pixels, the final strip in stereo should have a resolution of 18432x1536. (thanks to deflix on Oculus Forum)

by 3DV
Here's a strip to show how it's done. You can easily confirm this working properly by uploading the image to your Oculus 360 Photos folder.
Red is left eye, blue is right eye. 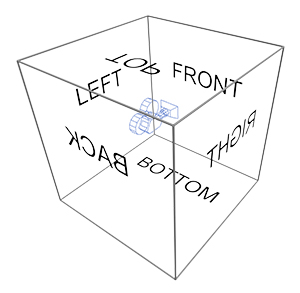 We do not have a way to move tiles around to match what is shown in your 'Strip' image but maybe you got it to work.

by jobes
Yes, Oculus Rift & Gear VR require a different strip output to the ones we're used to with P2VR, as 3DV highlights. Displaying equirectangulars adds pinching to the zenith and nadir of your panorama, so the Oculus cube strip is definitely the optimum for good viewing.

At first I used a long and complication Photoshop action which arranged cubeface outputs in the right order in a strip. However for the last couple of months I have been using the free and simple Gearshift app http://panoramaphotographer.com/software/gearshift/ by Keith Martin. I can recommend it.

1. Output an equirectangular image (or two, if you're working with stereo pairs)
2. Load this into Pano2VR
3. Apply an output template I created (attached) which converts the equirectangular(s) into 1536px cubefaces. Just load it and press the 'output' button.
4. Load the front face(s) into Gearshift app to convert into a working Oculus cube strip
5. View on Gear VR!

FYI I put in a request a couple of months ago to GG support, asking for an alternative cube strip export option, and I believe that's on the 'to do' list. In the meantime Gearshift is a simple and reliable complement to the existing P2VR tools.

by 3DV
Thanks a lot for the link to Gearshift, just what I was looking for!
I was about to create a Photoshop action too, saved me some time

by 360Texas
Thanks for the link.

I too downloaded GearShift and created a horizontal strip

First Observations: MONO
Copied over to my s7 folder /Oculus/360photo/mypano

Gearshift did in fact create a horizontal strip in the proper cube face sequence order [front,back,up,down,right, left] with correct image rotation not photoshop flipped of the (u.jpg)up -90°and (d.jpg)down +90°cube face. The UP and Down were actually rolled or rotated not FLIPPED left to right.

Then put the s7 in my Gear VR and navigated to 360Photo and visually evaluated both images for brightness and sharpness quality.

STEREO Option
Regarding Stereo creates a 12 cube face horizontal strip ( 2 six cf's) . Stereo starts with Gearshift asking for selecting the Left then Right cube face but after finalizing the 12 CF horizontal strip looks like a pair on mono cf's.

Our stereo horizontal strip was 18432 x 1536px and 4mb. It created a horizontal strip containing 12 cube face (1 set of 6 Cube faces for each left and right eye). Stereo end result when viewed with Gear VR was not much if any image depth. Yes, I had several chairs setup behind each other to take advantage of the stereo affect.


I did not find any appreciable quality difference between the MONO, STEREO horizontal strips and equirectangle when viewed on the Samsung Gear VR headgear device.

By using cube faces, I can place photo panos but with out the need of the pictures be taken with a fisheye lens? Or cube faces is only for 3d renders output?


I tried to view the http://panoramaphotographer.com/ website but it looks like its not working at the moment.

by 360Texas
I learned our equirectangle (2:1) panoramas work ok when using Samsung Galaxy s7 with Gear VR on Oculus 360Photo.
We will not be using cube face horizontal strip.

Our panoramas were taken with FISHEYE 180°. I am not sure about panoramas with no fisheye or cylinders
All times are UTC+02:00
Page 1 of 2