In v. 4 I was able to hide all hotspots by using "%hotspots." This does not seem to work in v. 5; some hotspots hide, others do not. Any ideas what's different? 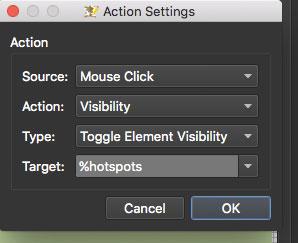 I just discovered that when I change the action to toggle the alpha to 0, rather than toggling the visibility, then using "%hotspots" as the target does indeed affect all instances of hotspots.

Is this workaround necessary? This FORMERLY worked fine with toggling the visibility, in V. 4.
Top

This is a bug and it has been reported.
Regards,
Hopki
Hopki
Garden Gnome Software Support
support@ggnome.com
https://ggnome.com/wiki/documentation/
Top

Howard wrote:I just discovered that when I change the action to toggle the alpha to 0, rather than toggling the visibility, then using "%hotspots" as the target does indeed affect all instances of hotspots.

Is this workaround necessary? This FORMERLY worked fine with toggling the visibility, in V. 4.

I use "#hotspots.*" which e.g. addresses all beginning with "hotspots" , can you try this and report back?

One drawback using this however, I find is that you cannot connect the same action to other elements with the "|" divides symbol between them as in:

Hi Guys,
In version 5 you would use a skin variable, true/false and the action, Set Variable Value.
This way when you hide the point hotspot, it stays hidden until you select to see it again, regardless if you change nodes with say a drop down menu. The old way using the # or % only hid the point hotspot until you changed nodes then it reappeared again as that was its starting state of the point hotspot.

To set this up is quite easy, but I have broken it down step by step.
Open a two or more node Pano2VR 5 Pro project.
Im saying Pro as this is using pro features but this also works in the standard edition.
Click the skin canvas to get to the skin settings the add the variable.

From the components tool box drag in the Drop-down Silhouette and Node Thumbnail Pro Silhouette components and position them.
I have also added a hide and show button, well its two buttons stacked on top of each other as they are slightly different to show the state of the point hotspot visibility giving the viewer a visual indication if the point hotspot is hidden or showing.
The Drop-down Silhouette menu is positioned top right and anchored top right in its properties panel. 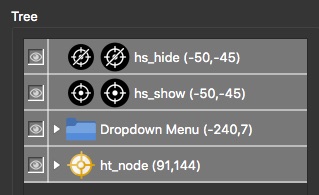 The hotspot template which has the ID ht_node has a logic block set under the alpha. 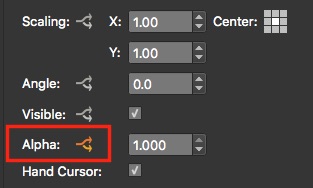 Im using Alpha as I want the point hotspot to fade in and out and with the Alph logic block I can set a transition and time for the transition. 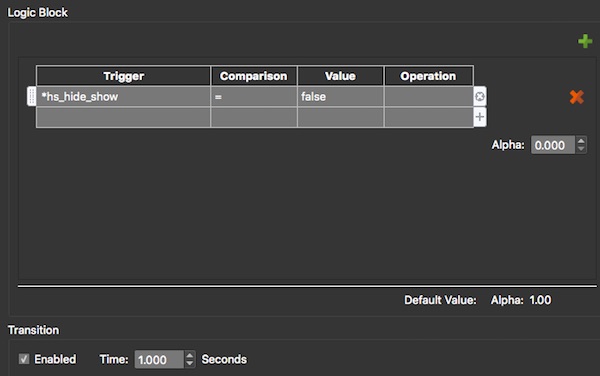 The logic block condition is when the trigger hs_hide_show is equal to false the the Alpha will be 0.00. The fade will take 1 second as transitions is selected and the time is set to 1 second.

So the hide point hotspot button which has the skin ID of hs_hide also has a logic block for its alpha. Its set to alpha 1.00, the logic block looks like this: 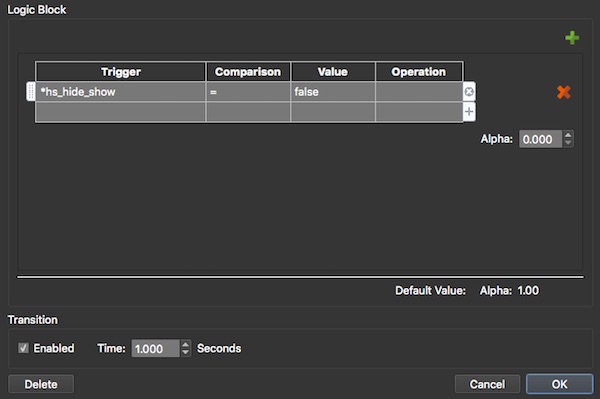 It also has the action to set the variable value: 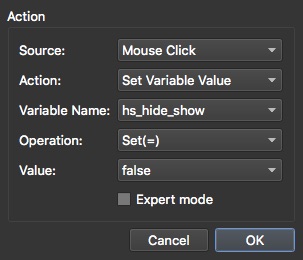 What will happen is as soon as you click this button it will change the variable to false.
When this happens both the point hotspot template and the button will fad out as their logic block conditions state then when the variable is false the alpha for both should be 0.00.

The show point hotspot button starts off at alpha 0.00 and also has a alpha logic block: 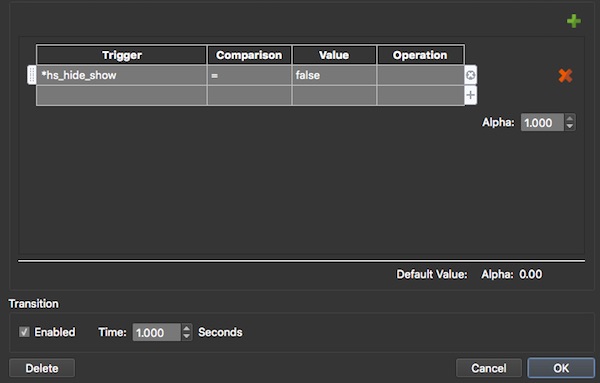 When the variable is false the alpha will change to 1.00 so replacing the hide button.
It also has a set variable value action to change the variable back to true. 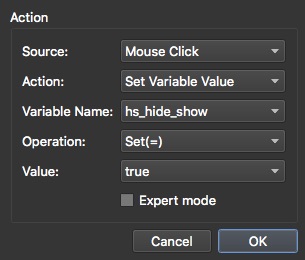 Using variables means that if you had other point hotspots say for image popups or displaying information you only need to set the logic block in each to hide and show them. This is regardless of skin ID's as its looking at the variable condition.

Using the drop down menu you can change nodes to Image Two and the point hotspot is still hidden. Only when you click the show point hotspot button will it appear.

Of course this is not just for point hotspot templates, you can use this to hide and show anything.
Example, taking the attached project you could open the skin and select the container Dropdown Menu.
Set its alpha to 0.00 then under its alpha logic block add the condition: 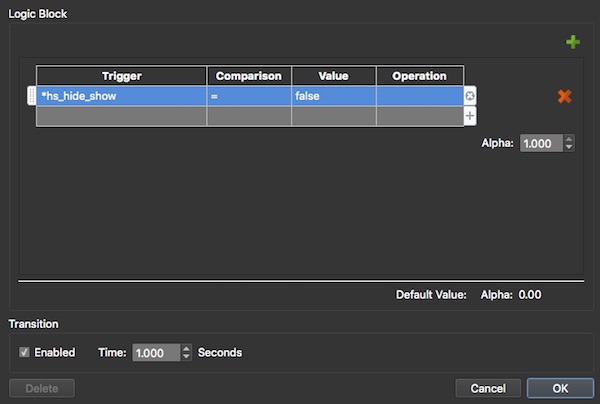