V5 VR HMD files and How to.

skyfocus wrote:I noticed a problem with this VR view, sounds are played double, giving a weird echo in the tour.

No sound in VR mode IOS 9.2.1
may be it is some kind of civil browser war in between Google, MS and Apple
VR, Keystrokes and 360 Video

Pano2vr 5.0.b5 was released yesterday 3 February 2016. With this release the Master Gnomes thoughtfully NOW include a new skin called Cardboard.ggsk.

We have learned alot about VR HMD how to.... now Read about WHERE to.

We subscribe to a monthly magazine called "Consumer Reports Organization". In March 2016 edition we read with much interest an Insights article titled:

" 'Reality' as You Know It is About to Change" Virtual reality headsets go mainstream, opening up opportunities for education and entertainment.

In this PDF article you will lean about the "WHERE" VR is being used commercially.

Enjoy READing article details in this .pdf . Be sure to save this .pdf for future reading off line

cr_orgVRcolor.pdf
Where to commercially use VR work
(3.57 MiB) Downloaded 130 times

Here are 2 NOT official VR Google icon's . 2 designs both .svg and .png24 flavor (24 means it has the transparent background).

Both are FREE .svg and PNG24 icons using the Garden Gnome red hat color scheme. I Zipped them because forum would not accept .svg file formats.

Purpose of these icons are... in you skin you can toggling from standard 2D single view port panorama viewing to ->> dual screen 3D using the new Cardboard .ggsk skin. 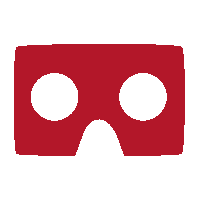 These are 24bit .png and .SVG icon's only. You need to create the URL link skin settings from 2D 1 screen to 3D 2 sceen and back. You might be able to use the toggle action setting.

With icons would be fine and fair to users and producers to set a difference between mono VR and 3D stereo VR ...right? Debate?
Top

Can you show me a link to your true 3D?
Do I need my Blue/Red glasses or do I need other special glasses ?

If I can see or visualize what you are talking about... maybe I can make an .svg

actually there is no true 3D - that would be a hologam ...but it is reserved term for a stereography a 3DS (3D stereo).
You can experience 3D stereo 360 surround photography the "old" way with the anaglyph : http://www.burger.si/DOGODKI/UTRINKI/Go ... aglif.html
or same situation with the VR Goggles (not googles) ... like cardboard clones: http://www.burger.si/DOGODKI/UTRINKI/Go ... sar_S.html (it was made with p2vr but works fine only with iPhone or Windows 10 phones but not fluently with androids (I didn't check the latest p2vr player).

If you have a Gear VR and Samsung S6 series phone or Note 4, 5 then this is the best way to experience the surrounding imitated with VR ... now it is one year I am all doing stereo (I have ~ 1000 stereo panoramas made so far...). Here it is an example for Gear VR: download the : http://www.burger.si/ORBX/360SkocjanCaves.zip , unpack it and upload files to your ORBX media folder on your Galaxy S6 (or Note) ... only after you will experience the last option you'll find what is the best VR experience ... cardboard versions can not be compared in no way at the moment.

At this point it is also my suggestion to p2vr developers that it would be very easy to add a feature of creating ORBX format - cubes of 1536 px - it is very like creating cube output tranformation only the up and bottom cube are with different orientation.

skyfocus wrote:I noticed a problem with this VR view, sounds are played double, giving a weird echo in the tour.


Is this something that is being looked at ? I'm still struggling with this sound issue (double sounds in VR), Customers are complaining. The only solution I can think of is removing the sounds completely, but I think that is not a real solution.

after being very please with the generation of a complex tour in Pano2VR, today I wanted to try the stereo capabilities.
The building of the tour was very pleasing, but the result in the viewer leaves a lot to wish for. What I have now isn't useable at all.
Please have a look a my findings and let me kow if that's the current status of development or if there's anything that I've missed and that I need to improve or change.

Here is a link to the tour, I watched it with different glasses on iPhone 6S Plus and Samsung Note 4, but the overall experience is the same.

First of all it is very difficult to adjust the eyes to get the stereo. I didn't find any settings for adjustment.
Second, the images are rather blurry. I found that it's still possible to zoom, which with stereo should not be the case.
I also found that at certain zoom levels the image is even more blurry, surprisingly, when increasing FOV.
The images seem to be sharpest when very slightly zooming in.
Third, on the Samsung Note the gyro is extremely lagging.

As a comparison you may have a look at this version of the first node:
http://bavaria360.de/biburg/stereo/compare/

Please can you tell me if there's anything I can do to get the same quality and performance with Pano2VR ?
Top

What headset were you using with your smartphones ?

I also use a Gear VR, but as this uses special file formats for ORBX viewer that's out of the question but outperforms all of the above.
However, for general public use anything cardboard-like is sufficient, but the viewer has to deliver

Thank you. We received our Gear VR last week. Just curious what others are using.

You probably already know this.. we copied 1 Theta-S 5376 x 2688px panorama over to our Samsung S7 edge in \ oculus\my files\ and the Samsung Internet - Beta browser works very well.

Ok Gnomies. I know you're already painting Easter eggs, so I've done some of your homework

Firs of all: The visualizing of the stereo effect was my mistake, I've djusted my Go4D to the larger screen and now it seems a lot better.
I also found that the iZugar is much worse in regards of sharpness compared to the glasses, so I ditched this and from now only will use the glasses or the Gear with the Android.

I also created some alternative versions of the tour to be able to better track down the issues.

My observationr: The performance on the Note 4 still is not useable, so skip this.
Everything else from now is on the iPhone 6S Plus with Go4D (aka c1) glasses.

The sharpness of the 1024 is MUCH better compared to the multires, and there is no visile difference in performance between the tour and a single node.

The performance of the Gyro is not as good as in the comparison image:
http://bavaria360.de/biburg/stereo/compare

But it's quite acceptable.
Unfortunately there seems to be kind of a "bouncing" effect, when the movement of ones head stops.
The image seems to arrive a bit delayed to that position.

So at least there is already some significant improvement to the first test from yesterday, but still needs some clarification from your side, please.

What I mostly want: Less or no delay while panning, and same sharpness from multires files as only this will allow to create a tour for the web/mobile and HMD in one go.
Please let me know if there is a way to achieve this maybe in a workaround, like forcing the HMD version to use he 1024-tiles or whatever.

I still very much like the ease of use for the tour building, but without the appropriate performance of the viewer that's of little use.
Top
Post Reply
131 posts