Streetview Tagging: How to add (multiple) complete streets to Streetview

imagine I want to do what usually Google does and take panos in a whole small town (as Google never did).

What would be the workflow? Just upload the pictures with geo?
With / Without location information - Would that be just the name of the town?
With / Wothout links to the next pano?
Will Google add the links automatically?
Street by Street? How will the linkage be done when crossing other streets?

I guess you get the point of what I am trying to achieve.

Any ideas are highly welcome...

Hi Zaphod,
Add your Panos to the project file and use the Tour Map to locate your position.
As you place map pins in the tour map this adds location data to the panoramas.
Once you have placed all the map pins then you can auto link using Pano2VR.
You just need to set a Place to all your panoramas then your ready to upload.
Regards,
Hopki
Hopki
Garden Gnome Software Support
If you send an e-mail to support please send a link to the forum post for reference.
support@ggnome.com
https://ggnome.com/wiki/documentation/
Top

I understand this so far, but still questions are open:

What is the correct place? Just the city?
If I have multiple tours that are linked to each other, how do I deal with this? I cannot put all pictures (there will be many...) into one tour. I was hoping Google does it automatically.

I have now played around with the tagging for Google and made an interesting experience.

.
I then just left the place empty and then it shows up under the name of the city, obviously as the default.
Unfortunately the Streetview App now complains about missing place and asks you to add one - however the panos are in their right location and the pin in the webversion shows in the middle of the city

2. Places / Locations are not found

Another very annoying thing is that it seems, that lots of places are neither showed in the dialog box in P2VR nor found when explicitly searched for them - although they are available in Google Maps in the browser. These however are found (when searched for) in the Streetview App. This allows for the following workaround: 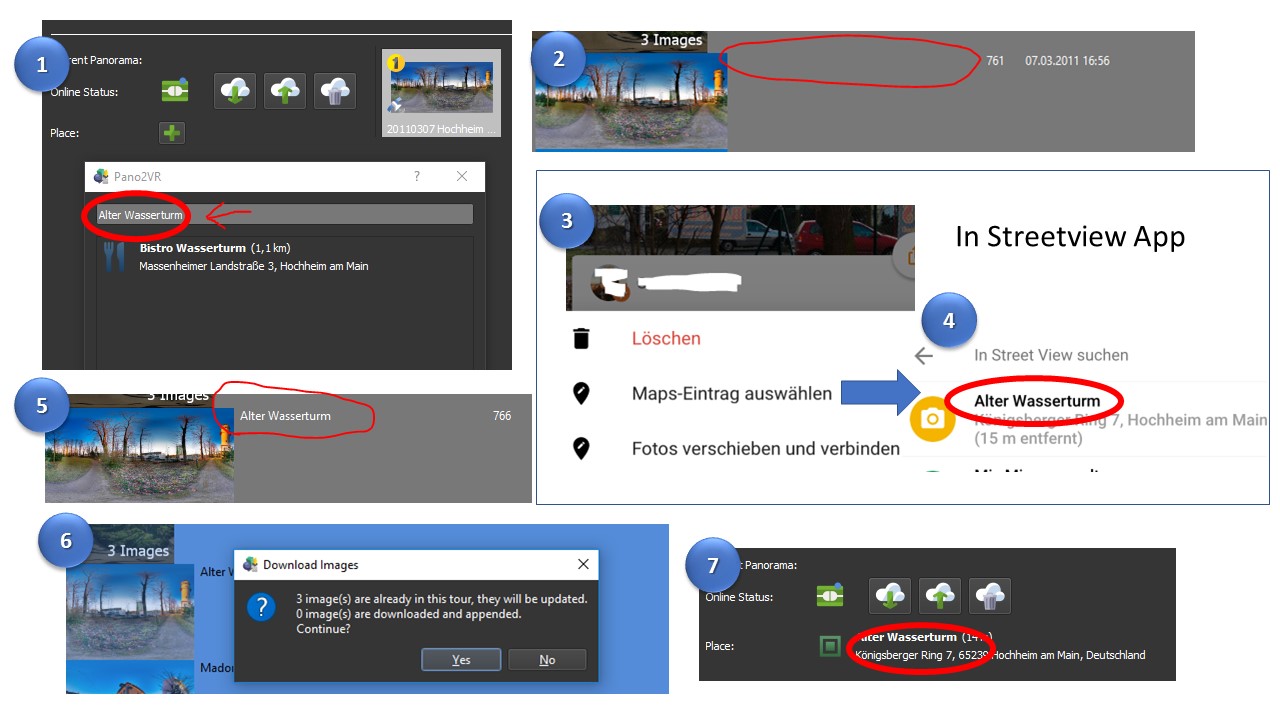 1. P2VR doesn´t show the place (Alter Wasserturm) in the dialog box, even when exlicitly searched for
2. We leave the place empty and upload
3. In Streetview App - Choose Add Maps Entry
4. Choose the missing place (Alter Wasserturm) from the list or after searched for it (if it doesn´t appear in the list)
5. After updating the tour browser in P2VR the plave name is shown
6. Download images/tour back into the P2VR project (as these are already present, it will only update)
7. HEUREKA: The former not available place is where it belongs.

This however doesn´t solve my issue not to know how to handle uploading streetview panos to a whole street or even city but might help in various other places.