Hi,
Here is a three node project that uses an Alpha Logic block that uses Pan as the trigger to fade in the Point Hotspot when you have rotated the panorama to the desired position. Both the Hotspot Images are in a container, it is this container that has the Alpha Logic Block.

In my example, I have three nodes each expression is locked to a node.
Here you see the first node is between -22 and 22, so this is easy. I have also included a Node trigger so this will only happen in node1.


This next one is a little more tricky as it is showing two hotspots for node2, but the back hotspot is between -157 and 157, so you can not use an And here. This is an extream case as most hotspots will be between either positive or negative numbers, for example, 10 to 30, -10 to -30.
As I am using an Or I must also include the NodeID before each of the Or statements, so Node And Pan Or Node And Pan.

The good news is you can select the conditions and copy and paste them into another expression.


The last node, node3 just has the hotspot show to come back.


This is actually very logical when you think about it.
And as a helper, I have added two text boxes, one to display the pan angles and the other the current node.

I will be writing up a feature request to make this easier as we know the pan and tilt of each hotspot it is just a case of being able to set a distance from it to show.

Further reading about Logic Blocks can be found HERE.

I understand that node is the number of the panorama? How to set another value? If I have 200 panoramas on a tour, then by number, this is not an option at all. If you did as in the screenshot, it does not work ( 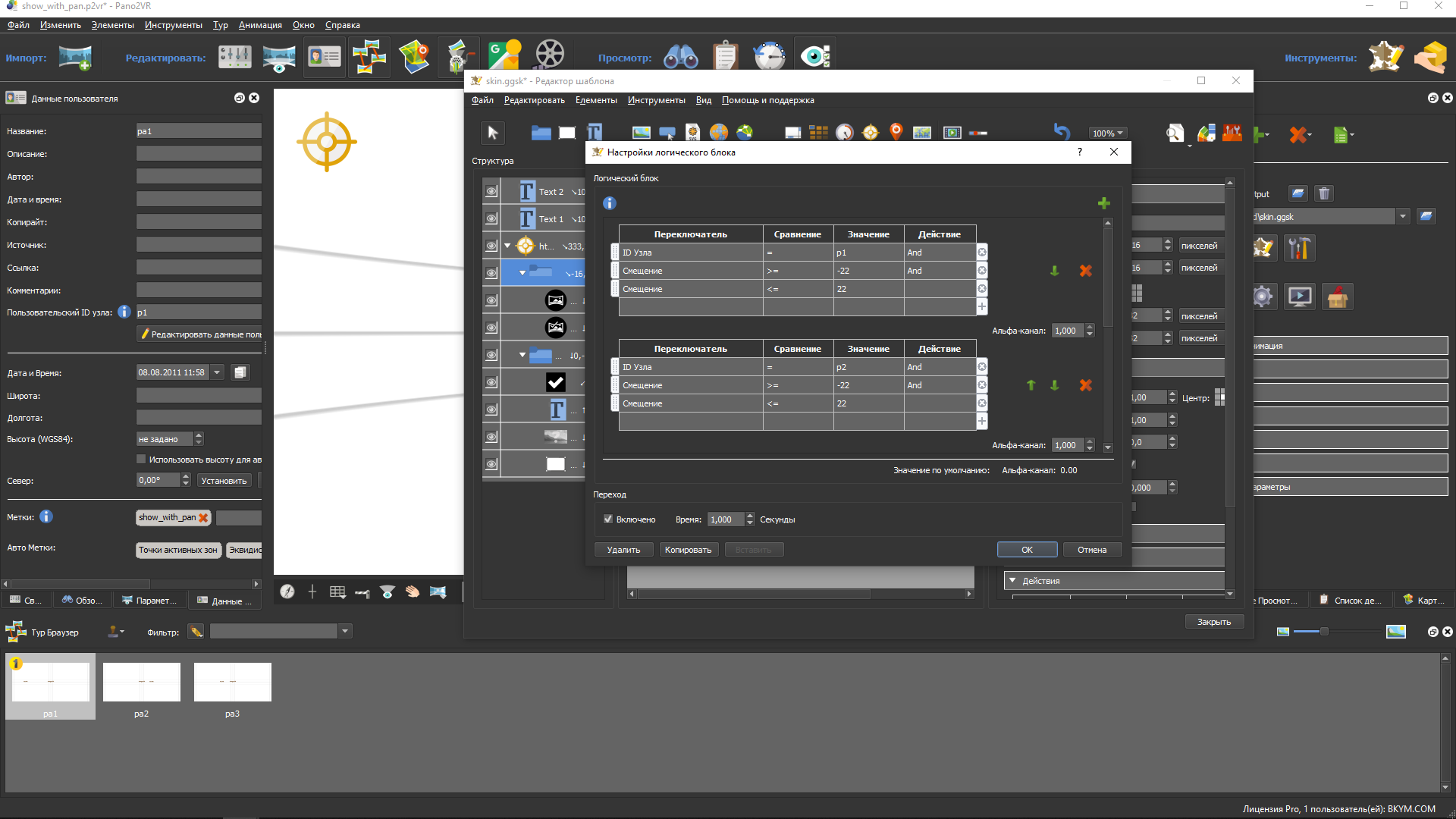 Guess you've found the solution already but for others who might stumble across: Just apply a title to your nodes and use $(ut) as trigger instead.
Top

"There is an example of? How does it look?"
Dave
Pano2VR Forum Global Moderator

Could this possibly be combined with the callout hotspots you posted?

So the when a hotspot comes into view the callout opens and retracts again after leaving view?

Also, when I want to use it for image/info/video hotspots, do I need to name them the same in every pano? So if pano 1 has 5 image hotspots and an info hotspot, I would name them node1, node2, node3 etc, And if pano 2 then has three image hotspots, an info and a video hotspot, I would again (in pano 2) name them node1, node2, node3 etc? And the same for the next, say, 10 pano's? This can get tedious.

Isn't there a way to have a hotspot read the viewing axis and have it fade in/out when it's x degrees from that viewing axis?