Equirectangular previews can be useful. As such, sometimes it is necessary to set the default view or "center-point" of these previews to match the default view of the panorama. However, P2VR is rendering the equi's with tilt applied when it should really only be applying horizontal shift. This creates bizarre "warped" looking previews which are not helpful.

I noticed that even though the PTRF values below the checkbox are greyed out, I could still enter values manually. So I thought setting "tilt" to explicitly be "0" could override this behavior? but it had no effect apparently.. 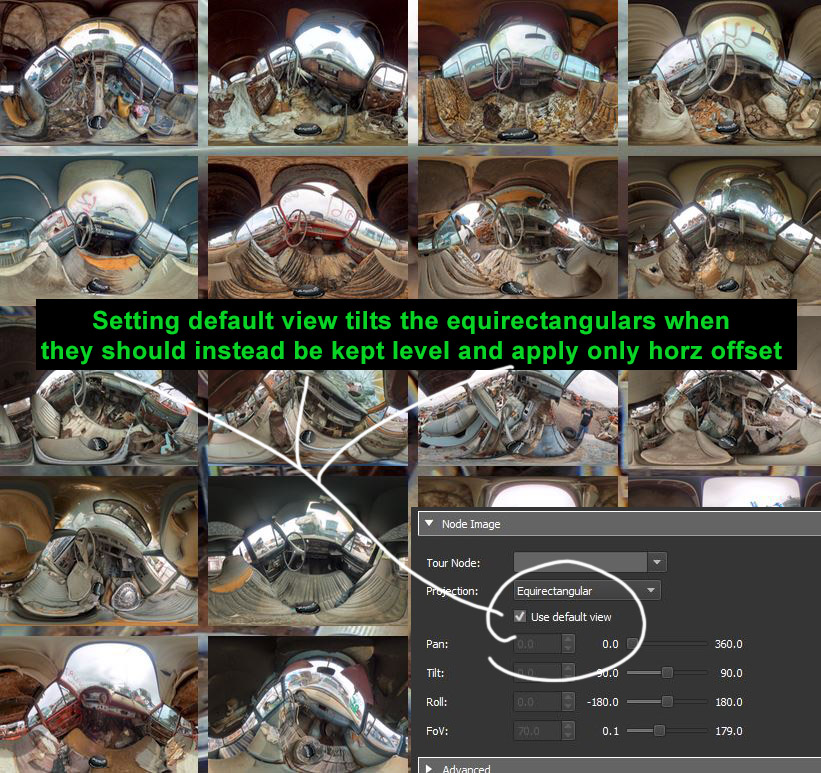 Hi,
The check box is Default View, If your default view has tilt then it will show the image tilted.
You can simply click in the tilt box and set 0.
Regards,
Hopki
Hopki
Garden Gnome Software Support
If you send an e-mail to support please send a link to the forum post for reference.
support@ggnome.com
https://ggnome.com/wiki/documentation/
Top

That doesn't work, I already mentioned that in my previous post-

"I noticed that even though the PTRF values below the checkbox are greyed out, I could still enter values manually. So I thought setting "tilt" to explicitly be "0" could override this behavior? but it had no effect apparently.."
Top

Re: "The check box is Default View"

Why do you feel you have to point that out to me?

There is a checkbox, it clearly says "Use Default View". Do you think I cannot read or?

Hi,
All I am tying to do is help, what I was trying to point out, perhaps badly, is that while you have the default view selected then this is what you will get, as you know.
But if you deselect this then the view should be your actual input image if all sliders are at default.

The part about clicking on the tilt box was my an error on my behalf.
In the transformation output if you select one of the greyed out fields it deselects the "Use default view" and then the settings will be used, so one or the other.
I was not aware that you could select a greyed out setting and change it in a Node Image without it deselecting "Use default view".
To this end I have sent a message to the developer asking if that selecting the angle field should deselect "Use default view", which is what it does in the transformation output or that it should indeed let you change the angle field for that one angle while keeping the other default view settings.
My guess is its a bug that allows you to select it.
But been doing this long enough not to second guess the developers.
Regards,
Hopki
Hopki
Garden Gnome Software Support
If you send an e-mail to support please send a link to the forum post for reference.
support@ggnome.com
https://ggnome.com/wiki/documentation/
Top

Hi,
As a follow up to this I got word back from the developer.
How it should work is how Transformations works, so when you select an angle field it deselects Use default view.
This has been bug tracked and fixed for the next release.
Regards,
Hopki
Hopki
Garden Gnome Software Support
If you send an e-mail to support please send a link to the forum post for reference.
support@ggnome.com
https://ggnome.com/wiki/documentation/
Top

Let me clarify my point with an actual use-case example-

A person has a bunch of panoramas-

The person goes through and sets all the various default viewpoints of how they would like each of them to look when opening. Some of these default views are at zero tilt, but perhaps quite a few have default views set so they are looking at something a bit more "centered" or otherwise re-composed in the frame. A slightly downward pointing view off of a high balcony for example, or a view angled slightly up showing a staircase.

Then they decide to have *equirectangular* thumbnails for their thumbnail menu. But, they want these new thumbnails to reflect the new orientation of their views. So they match.

The easiest way to do this would of course be to just check the "Use default view" checkbox in the Node Image panel.

The problem however, is that these new equirectangular views take the new viewpoint literally- and are set with tilt to match the default view the user has set. This seems logical from a programming point of view, but the visual effect of having warped thumbnails (because of tilt values)is bad for the presentation/design/appearance of the tour previews.

The large background image is the new default view of the panorama.

Now- this can be corrected using the program as it is, by unchecking the "Use default view" checkbox and manually inserting the new "Pan" value and leaving the "Tilt" value at ZERO.

Note now the better appearance of this new thumbnail in the third position.

However, this is not a very efficient work-around. Because of the following-

1. The format of the Pan values do not match between the Viewing Parameters and Node Image (see green boxes drawn on the screen shot). One uses negative values the other does not. This makes manually transferring and calculating new values to be entered into the Node Image tedious and more prone to error. Especially if many panoramas are involved in the project.

2. Any changes made to th Viewing Parameters need to be re-entered again in the Node Image panel.

4. Manually setting the values on these was possible because I had three separate "node images" in the Skin. If one is using the Cloner, I don't think this would be possible, if all the panoramas had different values?

When P2VR is generating Equirectangular thumbnails (or other projections which are effected in the same manner), using the user's new Default View setting, tilt value should not be applied (or should be an optional setting). This will preserve the visual integrity of the thumbnails. 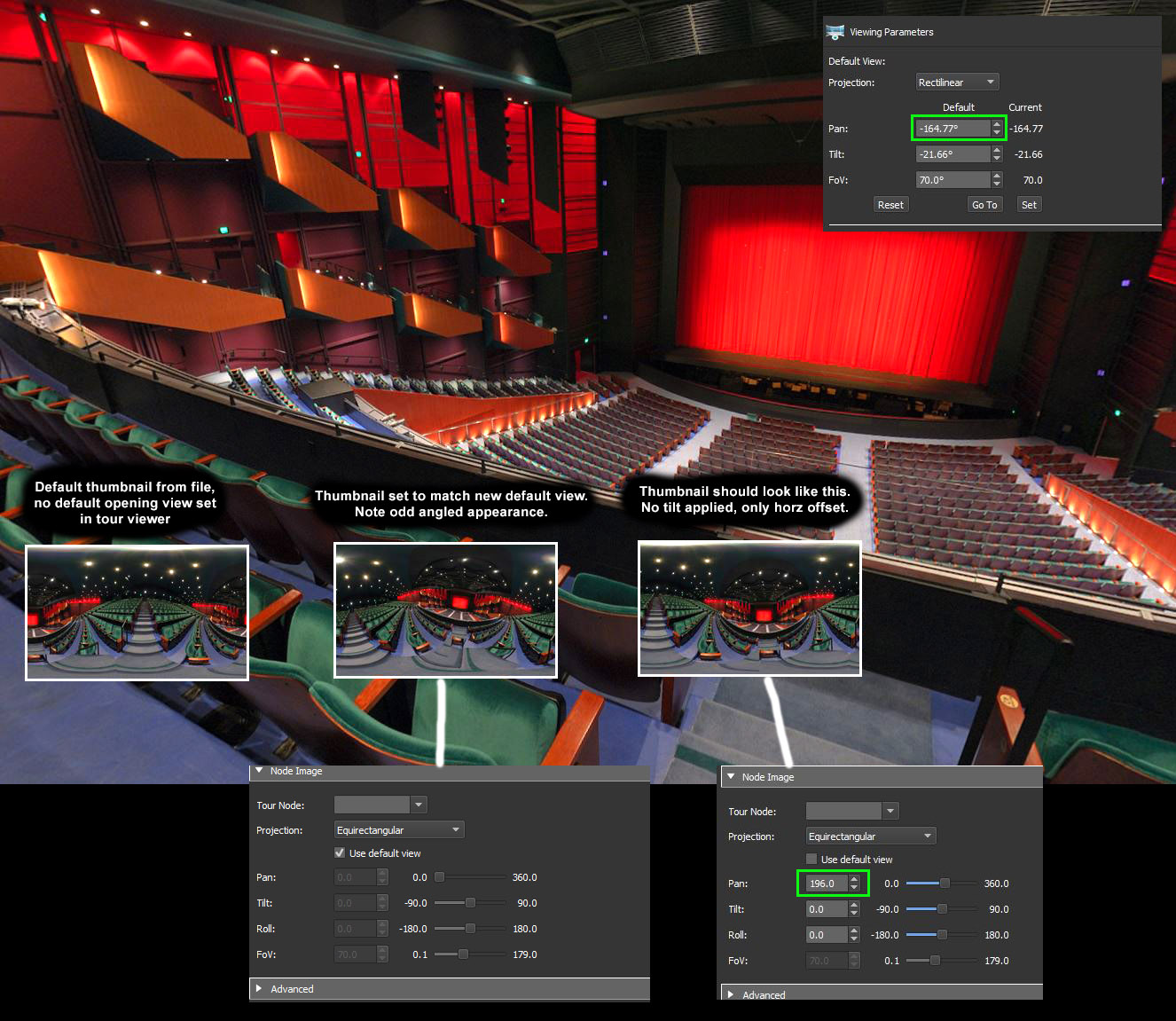