Hi Jare,
There are two ways to do this, one smarter then the other.

The first is just wrap a timer around each element and set a different timeout.

Then under the timer set:
Timeout 2 (for the first timer, then 4 for the next and so on)
Type: Loaded
Repeat: One time

Deselect visible for the timer and set the logic block to:
Trigger: Active
Comparison: =
Value: false

When the timer ends (value becomes true) the timer will become visible so making the child element visible to.

The second way is using variables and a timer.
So set a variable in the skin something like:
Name: intro
Type: Number
Init Value: 0

Add a timer,
Remove the logic block from the timers visible as its not needed.
Set under Timer:
Timeout: 1
Type: Loaded
Repeat: Toggle

As the Repeat is toggle the timer will increment the value every 2 seconds, so 1sec trigger, 1sec off, 1sec trigger and so on. As an example 5 seconds would be 2.5 second repeat.

Now in the element that you want to show, deselect visible then add the logic block to the visible.
Trigger: *intro
Comparison: >=
Value 1 (for the next element change the value to 2, then for the next 3 and so on)

How this works is the variable value starts at 0. The timer will increment this value every 2 seconds.
The elements have logic blocks that are looking for the value to make them visible.

You can also use the Alpha and fade in the elements using the delay in the logic block rather then use visible.
Also if you use:
Comparison: =
Then the elements will show for 2 seconds then hide.


Then to finish off, you can wrap all your elements in a container then set the containers visible logic block:

So now what will happen is all the elements will show one after another then at the count of 4 they all hide.
I have attached a skin that has the above using the alpha, then after a time out hides the elements.
Regards,
Hopki

that is what I need. thanks a lot for the example and explanations!!!
pindora.com
3dpano.pindora.com
Top

Here is my tour with intro done with the first way http://3dpano.pindora.com/public/medved/tour.html

Now I'm doing another tour, where is vertical menu with 15 items. I want the items to be displayed one by one, with a little delay.
I tried the second way with variables but there can be only the whole numbers used, I can not type values like 0.5 or 1.8 into the Logis block's Value field

When doing with the simple first way, I can reach needed effect, but after the next panorama is loaded, the effect repeats again. I need it only once, when my tour begins.
pindora.com
3dpano.pindora.com
Top

Hi Jar,
In my example if you add a second action so it looks like this.

This will trigger the event every second so speeding up the fade in's.

You can then also speed up the timer, so setting the Timeout to: 0.200.
Then for the container that will hide everything, set its logic block so the value is higher such as 20.

So the fade in happens very quickly, boom, boom, boom then you see it for a bit then all three elements hide.
Regards,
Hopki
support@ggnome.com
Top

Ok, thanks Hopki.
And what if I want to hold the effect start for some seconds, now they appear from tour init.
For example in this order:

1- 0 second - panorama is loaded
2 - after 1 second show element x (welcome screen)
3 - after 3 seconds hide element x
4 - after next 1 second show the buttons set, one after one
5 - after x seconds show some others elements

Pity that using the simple way with wrapping the elements by timers causes repeating the effect when panorama reloads.
pindora.com
3dpano.pindora.com
Top

Hi Jare,
For the elements that you want to hold for a few seconds you would use the logic. 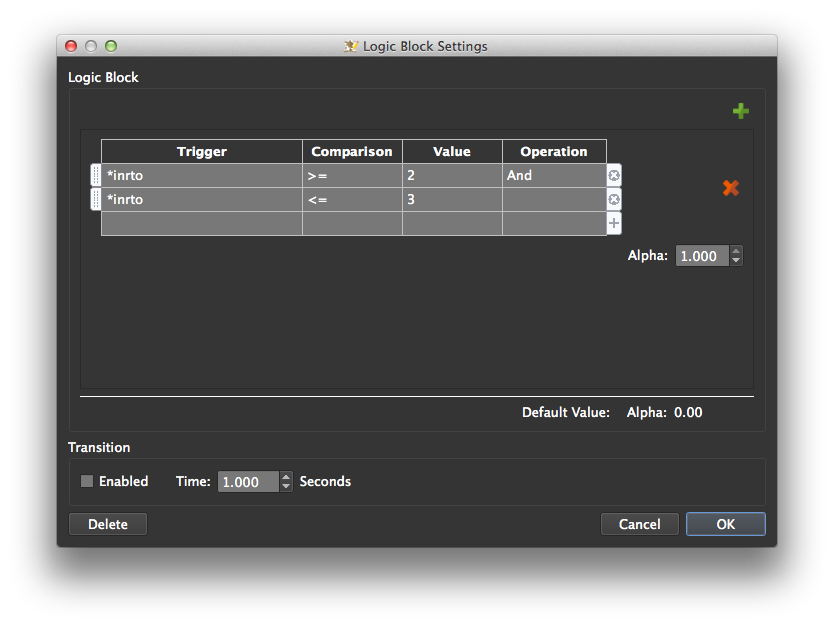 The above image shows the logic to show the element at count 2.
Then staying visible until the count of 3.

Hi Hopki,
thanks, will look at it.
And is there an easy solution if we need to work with values les than one second?


there can be only the whole numbers used, I can not type values like 0.5 or 1.8 into the Logis block's Value field

Hi Jare,
If using the timer you can set the time out value.
The default is 5 seconds, but you can set this much lower, lower than one second, in fact 0.001.
Regards,
Hopki
support@ggnome.com
Top

let me ask a more simple action with the timer:

How to do this:
I have a picture in the skin, it´s an overlay, just like that:
https://ggnome.com/blog/creating-3d-dis ... pot-images

How to do an action, that this overlay is "blinking" without any mouse-action (alpha 0 to alpha 1 and reverse), lets say with a 3 seconds frequency.
What is the most efficient way to handle - with the goal that it works in flash and html5 and in most browsers...
Soulbrother - one time in front of the camera
Fotokurse, Fotoworkshops und Panoramaschulungen
Neu in München: Der Irisfotograf
Top 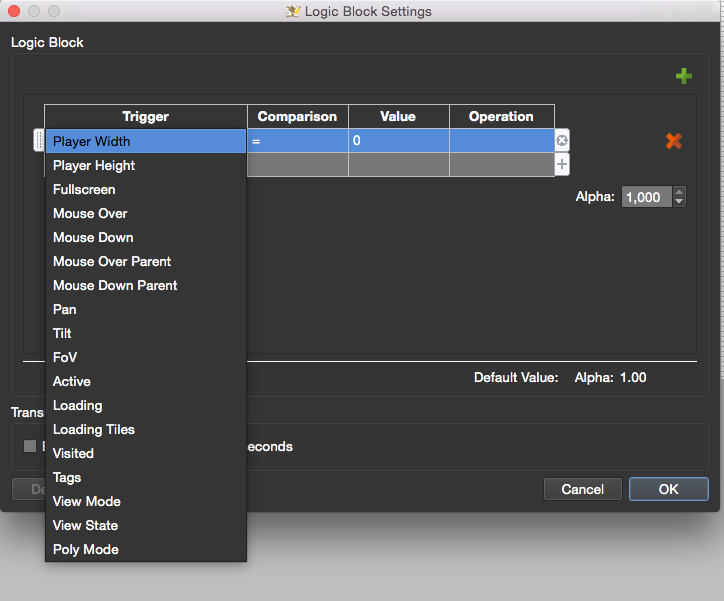 Hi Shytsko,
* intro is a variable you manually enter in the skin editor.
Click a blank area in the skin and you will see the variables list show.
Regards,
Hopki
support@ggnome.com
Top

Hi Hopki
I have adopted the skin you prepared for Jare in 2015 but would appreciate your advice on further modifications.

I have a welcome page with a start button which opens a single node. The sequence I would like is that upon the start button being clicked the sequence of the three images display at 2 second intervals and then all disappear and the node opens.

I would have thought require an action for start button to trigger click Timer 1 and then amend Timer 1 so it does not commence sequence of images from outset but on start button being clicked. Also not sure how to set up subsequent opening of node upon images disappearing.

Your guidance on how to achieve this would be much appreciated.

Hi Phil,
You can use a Numbered Variable and a timer to change the variable value, lets call it: vis_startup
In version 6 beta you can set the timer to Manual and set Repeat to toggle.
Then have a button to set value "1" to the timer. I will be using an Activate action so as it toggles to deactivate and activate every second it will be two seconds in-between activate states.

Then in the image loader set the visible logic block so: *vis_startup, = 0, Visible false.

I have added a screen tint which has a visible logic block and also a text box to display the variable number. This is only for testing and can be deleted.
Regards,
Hopki